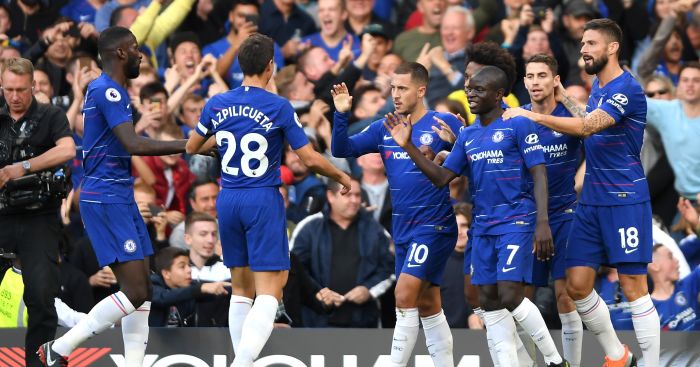 N’Golo Kante is set to sign a new contract at Chelsea that will double his wages amid Manchester United speculation, according to reports.

The France international has been linked with a move to United with Jose Mourinho making Kante ‘one of their top targets’.

It was reported in the summer that Chelsea would fend off any potential interest in Kante – from Paris Saint-Germain at the time – by making him their highest-paid player.

And it now appears that those reports are being back up with yet more that he will remain at Stamford Bridge and sign new terms.

The Daily Telegraph claims that Kante has told the Blues that he is happy with the £300,000-a-week contract on the table.

Chelsea are ‘confident that formalities will be completed imminently’ with the contract now in the ‘hands of lawyers’.

Kante won back-to-back Premier League titles with Leicester and Chelsea, while he recently won the World Cup with France in the summer.

His brilliant performances have continued this season and he even won praise from legendary Barcelona midfielder Andres Iniesta.