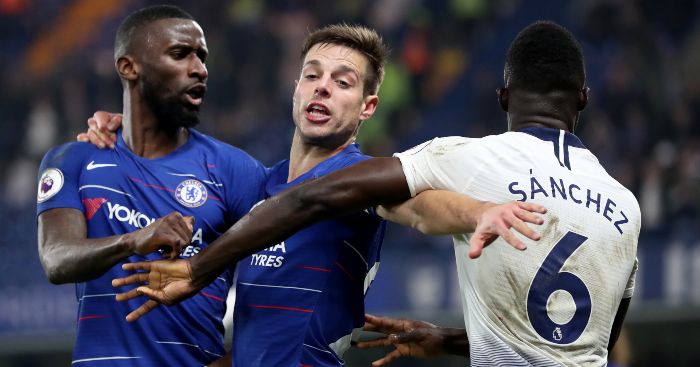 Chelsea pair Antonio Rudiger and Cesar Azpilicueta are said to have fallen out on multiple occasions before Frank Lampard was sacked as manager, according to reports.

Lampard’s status as the club’s record goalscorer and fan favourite could not save him from becoming Roman Abramovich’s 10th managerial sacking, even if the Russian acknowledged this was no ordinary decision as he made the rare step of issuing a personal statement of thanks to the outgoing man.

The former England midfielder – who won three league titles and the Champions League with Chelsea as a player – followed with his own statement, expressing disappointment that he was not given more time this season to take the club to the “next level”.

And since his departure there have been reports indicating a number of issues that Lampard was facing at the club with the latest a squabble between two senior pros.

The Daily Telegraph (via the Daily Mail) claims that Rudiger and Azpilicueta clashed ‘on more than one occasion’ as tensions reached boiling point before Lampard left Stamford Bridge.

Rudiger, Marcos Alonso and Jorginho were all part of a bloated squad with Lampard spending over £220m on improving his side in the summer, with all three players said to have ’caused issues’ for Lampard.

His decision to relegate Rudiger ‘down to fifth-choice centre-back’ is understood to have unhinged team morale with the Germany international and Azpilicueta coming to blows.

It is said that Azpilicueta ‘attempted to ease tensions’ over the apparent favouritism coming from Lampard over his selection of youth instead of experience.