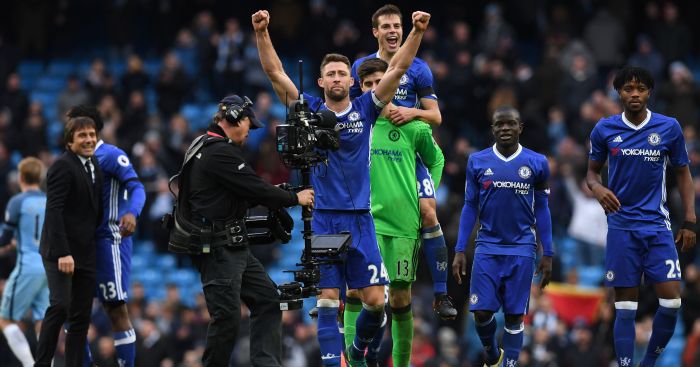 Jimmy Floyd Hasselbaink has backed Chelsea to maintain their focus and not get carried away with trying to match Arsenal’s consecutive win record.

After a mixed start to the season under Antonio Conte, the Blues now find themselves three points clear at the top of the Premier League table following a change of tactic to 3-4-3.

In the fresh formation, Chelsea are now on a run of eight league victories in a row – taking scalps against Tottenham and Manchester United in the process.

Arsenal won 14 consecutive matches back in 2002 but Hasselbaink, who was speaking to Sky Sports, has urged Conte’s men to focus on their next match rather looking too far ahead.

Next up for the Blues – West Brom at the Bridge. #mondaymotivation ? pic.twitter.com/SM2oGR7BoI

“I don’t think they need to concentrate on that,” he said when asked if Conte’s side could go on and beat the Gunners’ record.

“They need to concentrate on the next one. West Brom will be a hard game, they are doing very well.

“What I find more interesting at Chelsea – and I don’t know what the record in that is – they’ve had six settled teams with no changes.

“I don’t know how often that has happened. It was only against City that they had one change and for me that’s a big factor [in their success].”