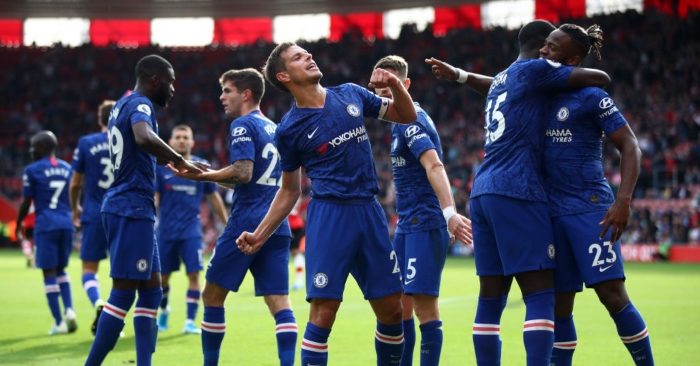 If ever you needed an advert for prioritising the development of players from your club academies, then it was provided this weekend by Chelsea and Newcastle.

In the same way that you can keep buying new clothes when you have a lot of perfectly good unworn items buried at the back of the wardrobe, so a football club which has plenty of money can keep acquiring new players while ignoring the perfectly good players they already have, loading up the club with dozens of them, loaning many of them out and yet still buying more.

This, at least on the surface, seems to be what has happened at that most overstocked of football wardrobes, Chelsea FC.

It’s tempting to see their transfer ban as being a blessing in disguise, forcing the club to actually bring on some of the tremendous young talent that might otherwise have found three or four new £50million players acquired over the summer standing in their way. It needed a progressive manager with plenty of goodwill in the tank to be happy to give the likes of Fikayo Tomori, Reece James, Tammy Abraham, Mason Mount et al plenty of opportunities. But he did it and they look tremendous, so it should force fans of all clubs to look at the depth of their own playing staff and wonder if the club doesn’t just waste money on buying players they don’t actually need and in doing so are constipating the development of players at the club.

Obviously trying to exclusively buy your way to success is a well-trodden path, not least by Chelsea themselves, who didn’t bring anyone through the ranks for the best part of two decades. However, it is one which is more miss than hit at some clubs. Manchester United have well-illustrated the folly of believing in the philosophy of ‘buy the best to be the best’, at least when you do it without any overarching strategy, structure or intelligence. The fact that Scott McTominay, an academy graduate, has been thought their best player in this paltry season only underlines the witless, crude, blunderbuss approach of splashing limitless money. They’re finally trying to address this, but do they really believe in it? Do the fans? Or do they just crave ever bigger spending and signings? It has become an addiction.

It’s such a familiar experience to hear your club has signed someone only for them to then disappear into the squad ranks, and the next time you hear of them is when they’ve been shipped out on loan or sold. Did they really need to be signed in the first place? Were they ever good enough? Didn’t the club have academy or reserve team players that could’ve done the exact same job or better?

A lot of the time the acquisition of players seems to be as much a PR decision as a wise football judgement, designed to give red meat to the fans, designed more to make the club look like they’re doing something and are proactive and busy. On the other hand, the development of academy players is less dramatic, more invisible and can go unnoticed by all but the most serious student of the club. In the current financially-bloated, money-focused culture, ‘Club Signs Expensive Player’ is a headline, ‘Club Develops Player’ isn’t. Of course, hand in hand with this is some fans’ lust for transfers as entertainment in and of themselves – a desire only satiated by the club spending money on acquisitions, needed or otherwise.

To some, if you’re not shopping, you’re nothing. They’re uninterested in youth development because anything without a price tag doesn’t get their juices flowing. If they don’t come with a price tag, how can their worth be known? To this mindset, developing a player such as Mason Mount for ‘free’ does not have the same attraction as buying Mason Mount for a lot of money. When you buy him, he’s got a specific value and can be judged against that fee as a success or failure. Which brings us to Phil Foden. If he had been bought for a lot of money aged 18, would he have actually played a lot more? We suspect so. As a homegrown player he doesn’t seem like a big asset, just as Jadon Sancho did not. Sancho bloody does now though. Oh and look, Manchester United want to sign him. What a surprise. It is as though he cost City nothing therefore it doesn’t matter if he’s not used much. This may even be subconscious, but there’s no doubt that if you’ve not bought a player for huge money (and Foden would command a big fee even now), he doesn’t seem as valuable. Homegrown seems devalued in this context.

But buying in talent isn’t any more of a guarantee of success than developing academy players. The list of expensive flops is a huge one. And yet all over the world, clubs are developing good players for Premier League clubs to buy, so it beggars belief that they do not have the resources or ability to do so themselves here.

But the results at Chelsea tell you why it’s good for business, good for the brand (I know, I know but that’s how these people see it), good culturally, good for football. Don’t believe me? Ask Newcastle United fans about the Longstaff brothers. Local kids given a chance and doing well matters more than almost anything. Yes, they have to be good enough, that’s a given, but is every transfer good enough? Of course not. It’s all a gamble. Why not gamble with your best homegrown/developed?

When you’ve got a lot of money at your disposal all too often you just end up buying stuff you don’t need, don’t really want and won’t make your life any better. This is certainly true in football.

Chelsea’s long overdue faith in its own youth development is such a pleasure to see, as it is at any club. Their 4-1 win at Southampton had a really imperious touch. We will never know how many of them would have been given the chance to strut their stuff on the biggest stages on a regular basis if the transfer ban wasn’t in place and they didn’t have a club legend as a new manager, but the recent history and culture of the club would suggest, not many. Indeed, I’d love to see a year-long transfer ban for all clubs, just to force their hands. Maybe three years would be even better.

Fans of all other clubs should now be turning to their own outfits and asking where their Callum Hudson-Odoi, Reece James and Fikayo Tomori are? Asking if they don’t have such players, why don’t they? And if they do, are they getting regular football and if not, why not? Are the clubs suppressing talent already present in the squad in favour of headline-grabbing transfers?

In many cases I suspect the answer will be yes they are, but will anyone at a club dare admit it, or do anything about it?