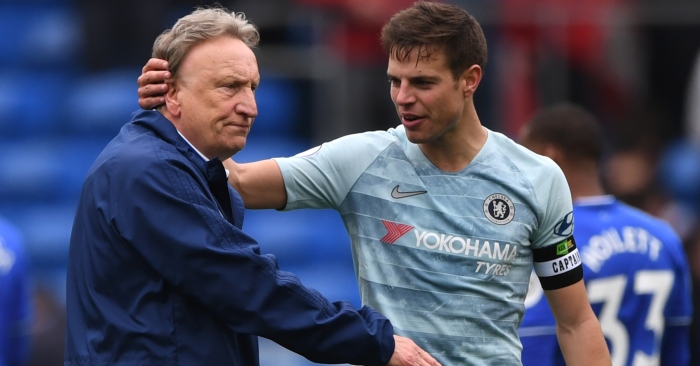 Cesar Azpilicueta has called for Chelsea unity after fans demanded manager Maurizio Sarri be sacked during their comeback win at Cardiff.

Late goals from Azpilicueta and Ruben Loftus-Cheek rescued Chelsea on Sunday and kept alive their hopes of a top-four Premier League finish.

But the dramatic conclusion could not mask a poor Chelsea display, which saw disgruntled supporters vent their frustration at Sarri and call for the Italian to be dismissed.

Sarri said he understood the reaction of the fans following another limp away performance, before adding after the 2-1 victory that “it was probably best for them to wait until the end of the match”.

Sarri, however, had enraged Chelsea fans before kick-off by dropping Eden Hazard and N’Golo Kante to the bench and failing to give exciting England youngster Callum Hudson-Odoi his first Premier League start.

Chelsea host Brighton on Wednesday and skipper Azpilicueta said: “We have to give the fans what they expect and the bad moments are when we all need to be together.

“We are not happy with the way we are playing and we have lost a lot of points, especially away from home.

“I know the fans want us to win, and when the results are not there, we are all responsible.

“They showed their thoughts but our job is to keep working hard.”

Azpilicueta’s first goal in almost a year was mired in controversy as he was clearly in an offside position when he diverted home Marcos Alonso’s flick-on.

The Spaniard admitted Chelsea had benefited from a huge slice of fortune and accepted Sarri’s side must improve during the final weeks of the season to secure a Champions League place.

“We showed great spirit, we didn’t give up, and in the last 10 minutes we turned it around,” Azpilicueta said.

“We got the three points but we have to look at ourselves, and if we want to achieve our targets we have to improve.

“On Wednesday from the first minute, we have to create a good atmosphere on the pitch.

“I know the fans will be behind us, but we have to give them what they want – fighting spirit, great football, and scoring goals.

“That’s what we both want and we have to pull in the same direction.”