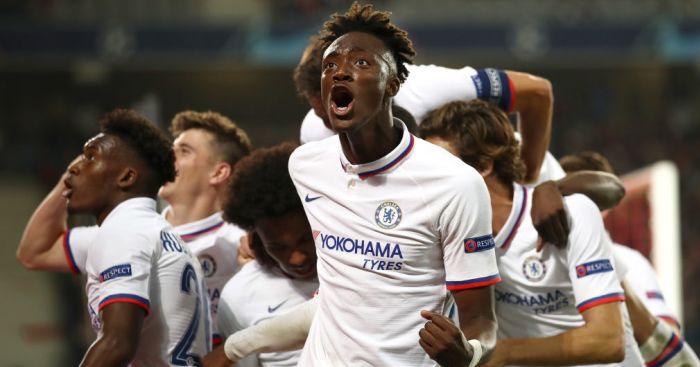 Tammy Abraham admits he felt like he was “dreaming” when he made his Champions League debut for Chelsea against Valencia.

Two months on and Abraham claims the make-or-break Group H clash in the Mestalla will be the biggest game of his career.

Chelsea lost that first encounter with the Spanish giants in September which left Frank Lampard’s young side in a difficult position in a tough group.

But Abraham – along with many of his teammates –  now looks a different player and admits he has been watching and “stealing” ideas from other top strikers on YouTube.

The 22-year-old said: “Before that Valencia game, Mason (Mount), Fikayo (Tomori) and I were warming up together and it didn’t feel real yet, that we were all in the Champions League together.

“Hearing the Champions League music in the background, we all said together that we were in the Championship the season before.

“For many of us it is a dream come true, so we don’t want that dream to stop now. We want to keep going, keep pushing, keep doing the best we can and like I said tomorrow we have to just leave it all out on the field.

“Harry Kane, (Sergio) Aguero, (Roberto) Firmino, these are Premier League strikers obviously but also (Robert) Lewandowski and all sorts and players who have played in this competition before.

“Like I said, tomorrow is the biggest game of the season so far and you have to let that joy, that childhood dream you’ve always thought of just go for a minute and focus on the game.

“It’s time for work now. I would say (this is the biggest game of my career), definitely, I would say so.”

Abraham has scored 12 goals in all competitions from club and country this season but desperately wants one in Valencia.

He added: “If I don’t score and my team loses the feeling is the worst. For me, I’ve grown up with the mentality that I always want to win. I’m always a bubbly character in training and in games.

“For me it is about getting three points and winning. If I can top that off with a goal that’s a big achievement for me as well. Yes, as a striker you want to score goals but if I don’t score and my teams wins I’m happy.”