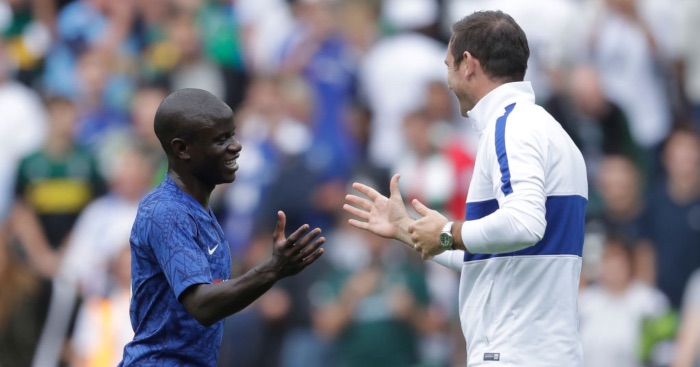 N’Golo Kante insists he is happy at Chelsea and hopes to have many more “great seasons” at Stamford Bridge.

The World Cup winner has been a key part of the Blues side since his arrival from Leicester in 2016, winning the title in his first season with the Premier League club.

As one of the best midfielders in Europe it comes as no surprise that he has drawn interest from the likes of Juventus, PSG and Real Madrid.

Madrid president Florentino Perez has earmarked Kante as a possible alternative to Paul Pogba, but  having signed a new five-year contract with Chelsea in 2018, the fan favourite insists he is happy in West London.

“So, in my head, I hope to continue to have great seasons with Chelsea until 2023,” he told Telefoot. “When I arrived at Chelsea, I was at Leicester and I had just won my first title with a club.

“Today at Chelsea, I have had three wonderful years winning titles.

“I think that it is a club that has helped me a lot and I hope that I will be able to win a lot more titles here.

“The year at Leicester was magnificent and I did not regret [not joining Marseille in 2015] at all.”

Kante has won the Premier League, the FA Cup and a Europa League title with Chelsea, and was named the club’s Player of the Year in 2017.

Kante’s season has been blighted by injury so far, but he did return with a typically impressive performance as Frank Lampard’s side beat Crystal Palace 2-0 last Saturday.