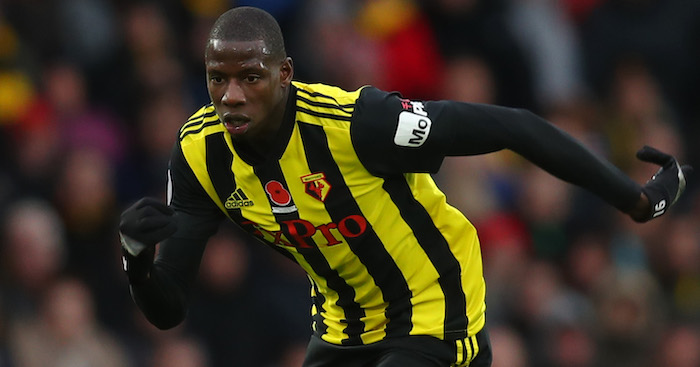 Chelsea are ready to make a late bid for Watford midfielder Abdoulaye Doucoure on transfer deadline day, according to reports.

The Blues are still searching for a replacement for Cesc Fabregas, who made a move to Ligue 1 outfit Monaco earlier in the window.

Deals for Nicolo Barella and Leandro Paredes were mooted but the transfers reportedly fell through with Paredes joining PSG instead.

And now the Daily Mirror has claimed that Chelsea have made Doucoure a target on the final day of the January transfer window.

The Frenchman has flirted with a possible move to Paris Saint-Germain recently by revealing that he has ambitions to play for the likes of the French giants.

Sky Sports News have reported this morning that no offers have been made for any Watford players so far and with less than a day to go a deal seems more and more unlikely.

However, Doucoure does have some grand plans for the futute.

“PSG holds an important place in my heart,” Doucoure said.

“They already contacted me, but I wanted to move to England at the time.

“Hearing that such clubs are interested in you, it’s a pleasure.

“I think a club like PSG are looking for a lot of players, they have a lot of leads, I’m not the only one. I’m happy to evolve at Watford and the club trusts me.”