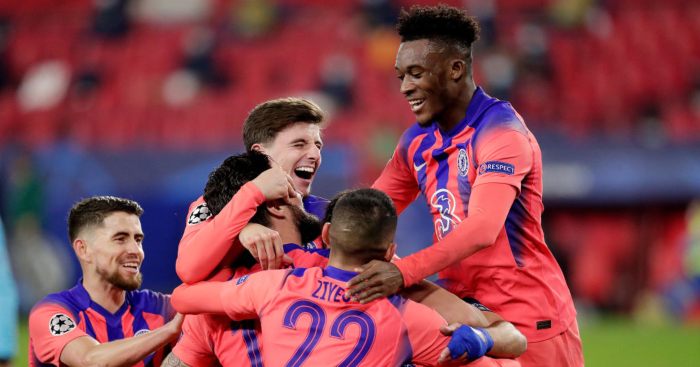 Danny Mills thinks Chelsea have a chance of winning the Champions League this season if they can keep their key players fit.

Olivier Giroud completed a perfect hat-trick and then fired a penalty to boot as Chelsea thrashed Sevilla 4-0 to win Champions League Group E on Wednesday night.

Giroud delivered left-foot, right-foot and headed finishes for the perfect treble – and then whipped a spot-kick into the top corner for good measure.

Chelsea will host Krasnodar at Stamford Bridge next week, but sealed top spot with their win in Spain, and a potentially easier tie in the last-16.

“I think they’ve got an outside chance because they’ve got real talent,” Mills told talkSPORT.

“If their players stay fit – Mendy, Thiago Silva, Kante in the midfield.

“The front players are exceptional. They’ve got some incredible attacking talent and they can play in different styles.

“If they can keep Mendy, Silva and Kante fit then I would say they have an outside chance because there’s lots of teams struggling in the Champions League.”

And Mills has been impressed at how Chelsea boss Frank Lampard has handled Giroud’s lack of game time this season.

“It’s not only starting to show that Frank is tactically astute and a good coach, but his man management is very, very good,” Mills added.

“A lot of people said: ‘Why is Giroud still there? Why isn’t he kicking up a fuss?’ Why’s he not left yet?’

“Managing to keep 20-25 players happy that obviously can’t play week in, week out is difficult.

“He’s got a big decision to make. If you drop somebody who’s scored four goals and then let him out, he’d be scratching his head a little bit.”