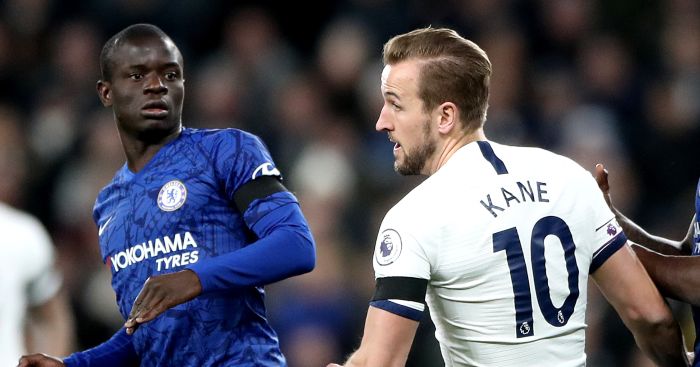 1) Has Kante actually improved Chelsea’s defensive record?
A lot has been written about the improvements Frank Lampard has made to his defence in recent weeks, and indeed Chelsea have conceded an impressively meagre two goals in their last eight games. But it must be said  they have enjoyed an easy run of fixtures. Sunday’s match against Tottenham Hotspur is their first real defensive test since the 3-3 draw with Southampton back in October.

Since he took charge of the club, Lampard has allowed his midfielders and attackers to freely improvise when in possession, which means they fan out in search of space and leave big gaps for counter-attacks should they get caught on the ball. Unsurprisingly, Newcastle, Burnley, Sheffield United, Rennes and FC Krasnodar didn’t have the strength to capitalise on any positional errors in the Chelsea midfield.

However, N’Golo Kante has been moved into a new defensive midfield position in recent weeks, and that could make a big difference. Kante has only ever played the Makelele role on a handful of occasions prior to Lampard’s first trial back in June. The Frenchman may be able to plug the gaps.

2) Will another Mourinho master class be defined by Kane versus Kante?
Certainly Kante’s ability to patrol the defensive midfield zone will be vitally important on Sunday. Harry Kane has been dropping into a No. 10 position this season to get on the ball and create, looking to quickly play Heung-min Son in behind as Tottenham counter-attack.

The 2-0 victory over Manchester City was a good example of this – and a Mourinho master class. Spurs will attempt something similar against Chelsea, sitting back to absorb pressure before looking to make the most of the gaps through the midfield. Kante will lurk at the base to protect his team-mates, but it seems unlikely he will be able to track Kane’s movement.

Son aside (more on that later) it will be interesting to see who Mourinho picks to support from the right wing. Whether Steven Bergwijn, Lucas Moura or Gareth Bale, this winger is expected to cut infield to help provide an extra body in the build-up, potentially further complicating things for Chelsea should Kante be left alone. Lampard may even switch back to a 4-2-3-1 and start Jorginho alongside him.

3) Will Sissoko and Hojbjerg be used to shut Ziyech down?
The most eye-catching detail of Spurs’ 2-0 win over Man City was the use of Moussa Sissoko and Pierre-Emile Hojbjerg alternating as centre-backs to convert Tottenham into a back five. Rather than instruct the wingers to become auxiliary full-backs, as Mourinho has so often done in the past, he opted to leave space in central midfield – safe in the knowledge City don’t tend to utilise the No. 10 space very much.

That isn’t the case with Chelsea, although Mourinho may still deploy a similar tactic at Stamford Bridge to deal with Hakim Ziyech. The Morocco international, who has two goals and two assists in his last three games, is quickly becoming Chelsea’s most influential player. His ability to create chances out of nothing, and thread a pass into the box from within the tightest of spaces, adds much-needed thrust to a Chelsea team expected to improvise their movement in the final third.

Rather than attempt to get tight to Ziyech, Spurs – wary of the multiple threats lurking around the edge of the box – are more likely to erect a wall of bodies in the back line, attempting to block the passing lanes into the penalty area.

4) Or can Lampard again show conservatism to outfox his former boss?
But all of this analysis so far is on the assumption that Chelsea will hold a lot of the ball and Mourinho will park the bus, yet recent evidence suggests the pattern could be very different. Chelsea held more than 50% possession in both of their wins over Spurs last season, with the win at the Tottenham Hotspur Stadium in particular a fascinating battle in which the student became the master; Lampard out-Mourinho-ed Mourinho.

In an attempt to unsettle Tottenham’s rhythm and deny Son and Kane space in behind, Chelsea may come out in a low block, leading to a conservative and low-scoring contest between two sides lightly sparring and waiting for each other to make the first move. This is what happened in Chelsea’s 0-0 draws with Sevilla and Manchester United earlier this season, too, suggesting Lampard is happy to take a point from games like this.

Then again, Spurs have improved significantly since the last time these sides met in the league. With Tottenham now looking like a true Mourinho outfit, one would imagine he will take control of this contest and force Chelsea to hog the ball.

5) Will Son get the better of Reece James?
The most significant head-to-head is between Son, who has nine goals and two assists in the Premier League this season, and Reece James, a right-back whose attacking prowess can make Chelsea vulnerable.

James is a very good player, but he can be a little naïve, getting caught too high up the pitch or following the wrong man if outnumbered in his own defensive zone. Should Chelsea get lured up the pitch, Son will find acres of space on the outside of the centre-backs – and Kane will almost certainly find him.

But even if Chelsea are more conservative, James is the potential weak link: Son could stand him up and get past him, unlocking Lampard’s back line.