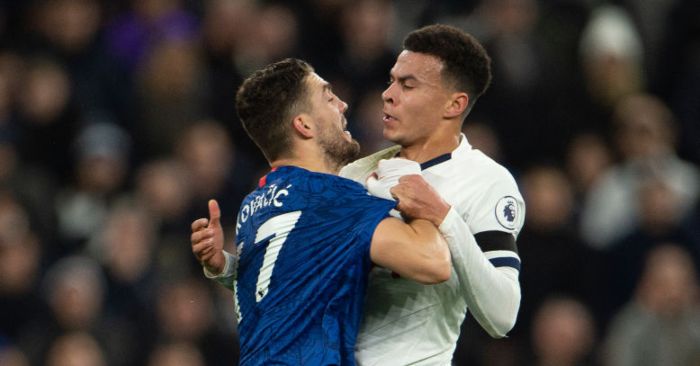 Chelsea’s 2-0 defeat to Manchester United was a disconcertingly poor game. It was final confirmation that this is a diabolical season for those at the top of the Premier League. Unfortunately Tottenham’s visit to Stamford Bridge this weekend will probably be very similar, given the disorganisation and half-baked tactical identity of Jose Mourinho’s side in 2020.

Injuries plague both sides’ attacks, yet the blame for their respective flaws is as much about improvisational tactics lacking in detail than the absence of key figures. There is a chance that Chelsea will dominate possession as Spurs counter-attack – the two managers’ preferred methods synchronising – but more likely it will be a wide-open meandering contest of errors and misplaced passes.

Here are five tactical questions ahead of Chelsea v Tottenham:

1) Do respective flaws point to a ’90s-style open contest?
The most likely scenario is that the lunchtime kick-off provides end-to-end entertainment as a microcosm of this bizarre, clumsy, and low-quality Premier League campaign. Watching the country’s ‘Big Six’ in 2019/20 has, at times, felt like returning to the 1990s – when pressing was sporadic, the intensity was much lower and the ball was easily carried from one half to the other.

Chelsea and Spurs both lack direction. For Frank Lampard’s side, an inability to recompress after losing possession has left them open to the counter-attack; they are too naïve, hence prone to taking part in pinball contests. For Jose Mourinho, things are just as disordered during an awkward transition from Mauricio Pochettino’s high-pressing aesthetic to something intangible.

The most likely outcome on Saturday is two below-par teams attacking and defending with hesitancy, creating huge amounts of space in the centre of the park for both sets of midfielders. It is the kind of retro contest we have got used to seeing this season – and the kind that lends itself to individualism. Mateo Kovacic and Giovani Lo Celso, as the two in-form midfielders injecting much-needed energy into their respective sides, can grab this systemically-flawed game by the scruff of the neck.

2) Will Spurs’ oddly open, non-pressing midblock play into Chelsea’s hands?
The most alarming tactical flaw under Mourinho so far has been the introduction of a non-pressing midblock, but without any of the defensive resilience to match. All of Jose’s best teams played in this manner, refusing to drop deep but compressing space and waiting for the chance to break forward, but Porto, Chelsea, Real Madrid, and even Man Utd had considerably better players to enact this philosophy than Spurs do at the moment.

The RB Leipzig defeat was the perfect example. Spurs tried to sit off, but without diligent positional play among the back four they left holes for the forwards to drift into. They sat off to invite the German outfit to come at them, but did so without the strength or intelligence in midfield to spot danger and track runners. Right now, Spurs are trapped between Pochettino and Mourinho.

For a visit to Stamford Bridge, and chastened by the 2-0 loss in the reverse fixture, Spurs will again gift their opponent long periods of possession. This means Mason Mount and the returning Tammy Abraham could, if on form, pierce right through the middle – just like Leipzig did.

A lot of people will argue there is no room in the modern game for Mourinho’s backing-off defensive blockade. Irrespective of whether that’s true, the current Spurs 11 are incapable of pulling it off.

3) Or will Chelsea’s creative slump make Mourinho’s tactics a success?
Then again, Chelsea’s own ’90s nostalgia could give Tottenham surprise success in this system. After all, the hosts have lost the creative edge that defined them throughout the first third of the campaign, a direct consequence of Lampard failing to coach detailed attacking patterns. As their imaginative powers wane, Chelsea’s playmakers are falling into simplistic and individualistic methods.

The most prominent of these is to pass in a U-shape across the back and then drive at the opponent down the flanks, hoping that overlapping full-backs will create space as the wingers dribble their way towards goal. Tottenham’s midblock isn’t very effective against teams as sharp as Leipzig, but it is cluttered enough to force Willian and Pedro into a cul-de-sac.

It is no surprise that Reece James’s crossing – a simple, direct approach – has become a big feature during a period in which improvisation has been hampered by low confidence. Spurs fans can be hopeful that Ben Davies’ withdrawn role at left-back (he forms a back three when Tottenham are in possession) will shore up this flank and stunt James’s influence.

4) Do Bergwijn and Lucas present a counter-attacking problem for Chelsea?
Should Spurs successfully turn this into a dull game – forcing Chelsea’s timid attackers to play in an area of the pitch surrounded by defenders – then they can win it on the counter-attack. Following a late cameo that improved the team’s overall performance, Mourinho will probably deploy Steven Bergwijn and Lucas Moura together up front from the start.

Lucas becomes isolated as a false nine but, if Chelsea are given all the possession, he and Bergwijn could make dangerous runs off the shoulder of the two centre-backs. Lampard tends to allow both of his full-backs to roam forward in an attempt to provide width (both wingers are inverted), and so there is the potential for a two-on-two to open up should Toby Alderweireld or Harry Winks find room to fire long balls forward.

The more likely scenario, as previously mentioned, is a territorially even game created by two poor sides cancelling each other out. But if Mourinho successfully lures Chelsea forward then the visitors – with so many of Chelsea’s key attackers out injured – become favourites.

5) Can Pedro and Azpilicueta make the most of Aurier’s mistakes?
The one area Chelsea will look to target is Spurs’ right flank, where Serge Aurier remains a liability. He was caught ahead of the ball – rushing out to make rash challenges – on numerous occasions against Leipzig and Aston Villa, which inevitably means opponents are filtering their attacks down that side of the pitch.

This was always a problem under Pochettino and has only been exacerbated by Mourinho’s use of a 3-2-5 when Spurs have the ball. Aurier is expected to provide attacking width on the right, further destabilising the team from a defensive standpoint.

Chelsea don’t have an obvious strength in this area, mind. Cesar Azpilicueta is hardly having the best season at left-back while Pedro was ineffectual against Man Utd last Monday. Things might look very different on Saturday when the two are faced with Aurier rather than Aaron Wan-Bissaka, although it is more likely the hosts will fail to take advantage of Tottenham’s primary flaw.