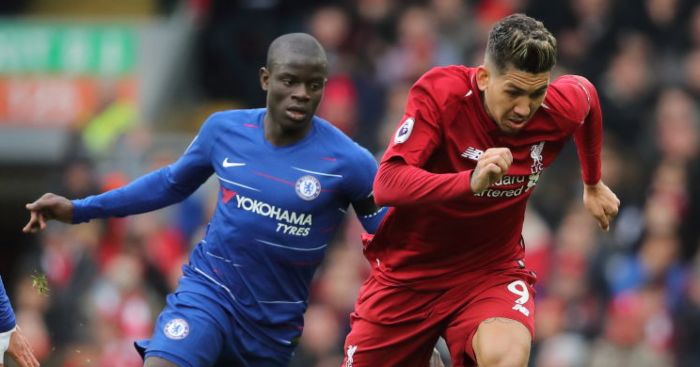 Liverpool fans can sense a shift in power. Manchester City’s defensive injuries have left them more vulnerable than at any stage in the last two years, and – with both clubs likely to get near the 100-point mark again – every slip feels significant. Over the next five weeks, then, Liverpool could break clear of their rivals.

Chelsea at Stamford Bridge used to be one of the most difficult matches of the season for Liverpool, but in their current guise Frank Lampard’s side are surely there for the taking. It would still be a statement win for Liverpool, but internally one the club will be expecting. The challenge for the hosts is to be as disciplined as they were in the Super Cup. It won’t be easy.

Here are five tactical questions ahead of Chelsea v Liverpool:

1) Do Chelsea look to repeat their Super Cup tactics or press hard in front of their own fans?
The only match this season in which Chelsea didn’t look porous in central midfield, didn’t look incapable of transitioning from attack to defence, was the Super Cup. That’s because Lampard sat off Liverpool in a surprisingly deep 4-5-1 formation, refusing to press and therefore maintaining compression between the lines. Chelsea’s biggest issue at the moment is pressing as individuals and spreading across the width of the pitch, seemingly unaware the likes of Klopp and Pep Guardiola prioritise defensively-compact positioning, especially during sustained periods of possession.

However, there are several reasons why Chelsea are unlikely to repeat that performance. First, N’Golo Kante probably won’t start (having only returned to training on Thursday) and the Frenchman was superb in the Super Cup final. But perhaps more crucially Chelsea are on home soil; they will be expected to rush at the Liverpool back four and swarm the midfield, as they have done so successfully in every league game at Stamford Bridge this season – for the first 20 minutes, anyway.

To do so would open them up to Liverpool’s counter-pressing and the quick attacks funnelled through Klopp’s front three. There’s no need to go into great detail here about why an open game, with two stretched formations, favours Liverpool. Chelsea have already conceded 11 league goals this season.

Finally, Chelsea probably won’t be able to sit back and defend doggedly because, this time, Liverpool will start the man who transformed the Super Cup from the bench in August…

2) Will Firmino run the game in a Kante-less Chelsea midfield?
Roberto Firmino came on at half-time in the Super Cup and completely changed the game – and that was against a Chelsea midfield with Kante. Mateo Kovacic, Jorginho, and Ross Barkley make a trio worryingly short on defensive instinct; not one of them notices danger well enough to cut off passing lines, instead relying on desperate tackles after being caught out of position.

Without adequate tactical coaching to improve Chelsea’s overall shape, their midfield is generally spread too wide. A natural disconnect occurs as players press sporadically or wander away from their base positions to make themselves available for ambitious, expansive Chelsea build-up play.

Liverpool lack a creative central midfielder to drive on and truly punish this naivety, but Firmino will drop off the front line to cause some damage.

3) Can Barkley’s diagonals get Chelsea behind Liverpool’s roaming full-backs?
Whether Chelsea try to push on or sit back, Liverpool will end up with the lion’s share of possession, which means both Andrew Robertson and Trent Alexander-Arnold moving up the pitch to support the visitors’ forwards. It is no secret that Alexander-Arnold in particular leaves big spaces behind him (and occasionally finds it hard to scramble back), which is why Chelsea will need to hit the flanks early.

Barkley’s best quality is his sweeping diagonal passes out wide to Christian Pulisic, Willian or Pedro. The England midfielder has an unusual gift for wriggling out of a congested centre to spray a ball into the flanks, and on Sunday Barkley should be instructed by Lampard to aim for Liverpool’s right – where Pulisic can get behind Alexander-Arnold and square up to Joel Matip.

Tammy Abraham may struggle to hold up the ball against such strong opposition, meaning the Chelsea striker’s goalscoring run will come to an end unless Chelsea find ways to catch Liverpool on the break. Barkley’s long-ball distribution, then, is their secret weapon.

4) Will Salah and Mane overwhelm Chelsea’s full-backs?
In Liverpool’s 2-0 victory over Chelsea in April last season Mohamed Salah ran Emerson ragged. Now firmly established as Lampard’s first choice, Emerson should be considerably more confident this time around, but nevertheless he will have nightmares about Salah in the build-up to Sunday. Salah tore him apart over and over again, most notably bamboozling him with a one-two ahead of Mane’s opener and then ghosting past him as if he wasn’t there before firing a 25-yarder into the top corner.

On the other side, Cesar Azpilicueta continues to look hesitant at right-back while Mane has already scored four goals this season. Combining with an in-form Firmino, both Salah and Mane should comfortably get the better of the Chelsea full-backs in one-on-one situations. Putting aside question marks over tactical strategy, team shape and the balance of possession, Liverpool should quite simply destroy Chelsea’s defenders in the penalty box.

5) Will Chelsea spring a surprise by using a 3-4-2-1 formation?
All four of the above points would need rethinking should Lampard continue with the Conte-esque 3-4-2-1 formation deployed against Wolves and Valencia over the last week. Liverpool’s narrow forwards surely necessitate a change back to 4-3-3 for Chelsea (leaving the defenders three-on-three probably isn’t wise), and yet Lampard may see logic in sticking with it.

Using wing-backs would allow Chelsea to get tighter to the Liverpool full-backs and prevent crosses into the box, although of course a two-man midfield leaves them even more vulnerable to Liverpool opening them up on the counter. It would also a) mean no place for Barkley, making point three moot, b) increase the likelihood of Mane and Salah finding space centrally, and c) ensure Firmino can do even more damage in an under-stocked midfield.

But Lampard has defied the obvious tactical logic on numerous occasions this season already. Chelsea starting in a 3-4-2-1 is certainly not out of the question.