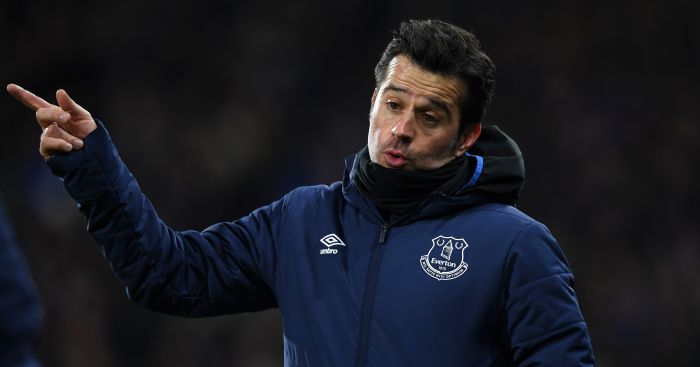 Everton manager Marco Silva insists a recent rare success against a top-six club should not be singled out as a pivotal point in terms of the mentality of his side.

A 2-0 win over Chelsea last month was the Toffees’ first against one of the Premier League’s big hitters in 26 attempts dating back more than two years.

And while the result was lauded as important in restoring Everton’s confidence against that level of opposition, Silva said their approach to that game was no different from many others and he expected similar for Sunday’s visit of Arsenal.

“When we won the game against Chelsea, our obligation as a club and as a manager was to do everything we can to win,” he said.

“It (25 matches without victory against the top six) is something which should not happen again if you do the right things.

“Two years is too many, a big number of games, but it is in the past and it is not important to talk about that game.

“I can say, also, it is the same mentality as some of the away games we played against some of the top sides this season.

“We didn’t win but in some of them we were close to achieving a good result.

“We achieved that against Chelsea at home and we have more games against these type of sides and we have to do everything we can to win the match: with ambition, desire, belief in us while respecting them.

“They have high-quality players who will create problems for us for sure.”

At Goodison Park on Sunday, Everton have the chance to make it three successive league wins for only the second time this season.

The upturn in results – three wins and a draw in five matches – after just three wins in 14 Premier League matches saw Silva included among the nominees for manager of the month.

It represents a significant turnaround from January and February when his position appeared to be under increasing scrutiny.

“Normally it is a sign of when your team performs well,” said Silva of the nomination.

“We are performing better and it is recognition of the good work we are doing, not just for me as a manager but the players.

“In general I am happy with our performances over the last few weeks with the exception of the 30 minutes against Newcastle (squandering a 2-0 lead to lose 3-2).”