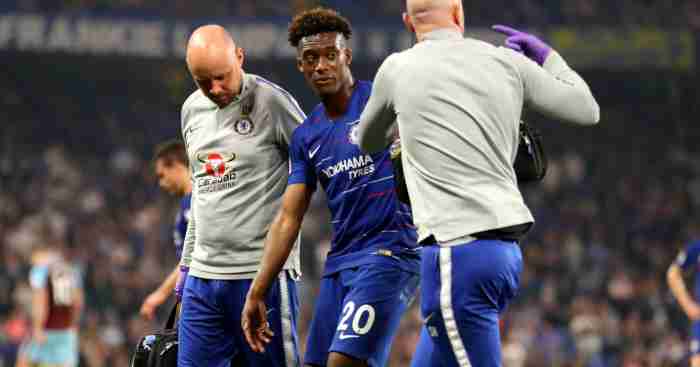 Chelsea winger Callum Hudson-Odoi is focused on the “road to recovery” after having surgery on a ruptured Achilles tendon which ended his season.

The 18-year-old England international suffered the injury during Monday’s 2-2 draw with Burnley at Stamford Bridge, and underwent an operation on Tuesday evening.

In a brief video message via his social media accounts, Hudson-Odoi said: “Hi guys, thank you for all the messages and support that you have been sending me, really appreciate it.

“I am doing better and feeling better, so thank you very much and (it’s) just the road to recovery now. Thank you.”

No time frame has yet been given for Hudson-Odoi’s rehabilitation.

The winger, though, will now miss Chelsea’s remaining fixtures as they bid to secure a top-four spot and also win the Europa League.

Hudson-Odoi would also have been expected to be involved for England’s Nations League finals this summer after making his debut last month.

A product of Chelsea’s academy system, Hudson-Odoi made 28 appearances and scored five goals in his breakthrough season.

The winger made his debut in the Community Shield against Manchester City in August and his emergence as a first-team player attracted the attention of England boss Gareth Southgate.

Hudson-Odoi was handed his first senior cap against Czech Republic and then was named in the starting XI for the 5-0 win in Montenegro.

The teenager also attracted interest from German giants Bayern Munich during the Janauary transfer window, with a £35million offer said to have been on the table.