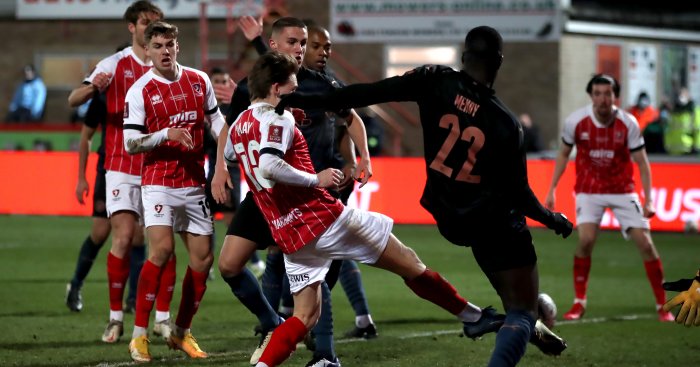 Predictably, Manchester City saw off Cheltenham to make it 10 wins in a row for Pep Guardiola’s men and 17 unbeaten in all since a 2-0 defeat at Tottenham in November.

Just like absolutely everyone expected. A routine 3-1 win for City. Nice for Cheltenham to get their goal. Except it wasn’t like that at all, of course, with City 10 minutes away from one of the most astonishing FA Cup upsets before Phil Foden (by a wide margin the best City player on the pitch), Gabriel Jesus and, most cruelly of all in some ways, Ferran Torres right at the end of injury time secured City’s 3-1 win and a fifth-round clash with Swansea.

Cheltenham really were so close to giving the town a less embarrassing association in the national consciousness than Tory-backing Covid superspreader events. Even in defeat, they can of course be immensely proud. Of the way City celebrated their goals, of the way Guardiola was visibly rattled as he stared down the barrel of a truly humiliating FA Cup giantkilling.

But most simply and importantly of all, a performance to be proud of. Sounds glib, is glib, but this was stunning. Yes, it relied on a much-changed City side being slightly off the pace and slightly lacking in intensity – all such cupsets or near-cupsets do – but how Cheltenham took advantage of a below-par City display. There was plenty of resilient defending, of course, but no parking of buses. Alfie May, who would eventually get his big moment with the opening goal, was superb while Finn Aziz was a wonderfully lively menace until cramp forced him off on 80 minutes and, clearly, turned the game on its head.

Above all, though, there was Ben Tozer. He’s been here before, part of a Northampton side that knocked Liverpool out of the League Cup more than a decade ago and a Newport team that took a strong Spurs team to an FA Cup fourth-round replay three years ago. Here he produced the ultimate Lower League Captain’s performance in this kind of cup tie. There was all the usual stuff. The defensive organisation, the blocks, the tackles, the leadership. Standard fare.

There was the eye-catching moment of true defensive ridiculousness thanks to a physics-defyingly absurd clearance off the line after Benjamin Mendy’s shot appeared to be arrowing into the top corner.

But above all of that, there were the long throws. Ah, the long throws. Absolutely glorious. No sooner did he get one than the commentators instantly invoked the hallowed names of Dave Challinor and Rory Delap. Every year there’s a cup tie where there’s fevered talk of a player with a long throw worthy of that exalted company. It’s almost always bunkum. A truly great long throw is one of the game’s greatest sights, a source of devilment and panic like almost nothing else. But truly great long throws – and truly great long throw-in takers – are also vanishingly rare. Most can just about reach the corner of the six-yard box with a following wind and, crucially, rely on launching the ball high and therefore gently and harmlessly into the sky to get there.

Slowly they loop towards a crowded penalty box where all but the most incompetent of defences will just deal with it every single time.

Not Tozer. Here was a true heir to Challinor and Delap. A proper rocket that disturbed City even more than the fireworks that halted play late in the first half (sorry).

There’s something about the trajectory of a good long throw that seems to cause specific mayhem. The fact that it’s launched in flat rather than, by definition needing elevation from the more prosaic ground-based starting points of your corners or the free-kicks of this world. Done right, a long throw just needs any kind of contact off defender or attacker somewhere near the front post and absolute bedlam will ensue.

After a couple of warning shots, City were punished just before the hour when a series of ricochets from the latest Tozer exocet ended with the ball at the feet of May, who had anticipated just such a sequence of events perfectly, to stab past Zack Steffen.

For a good while, that lead held despite more and more of City’s big guns being summoned for duty. In the end, the class told. Fittingly enough, the two decisive goals – and once City got the first there was an air of grim inevitability about the second even when the chance fell to the profligate Gabriel Jesus – came from evidence that the feet can be just as lethal as the feet as first Joao Cancelo and then Fernandinho created close to unmissable chances with lethally precise delivery.

City had survived a huge test and a monumental scare. For Cheltenham, they will always remember the time they so terrified the great Guardiola and his side that he resorted to arguing with officials over the precise location of an opposition throw with time ticking away.

A great cup tie, and City in the end just about manage not to throw it all away.