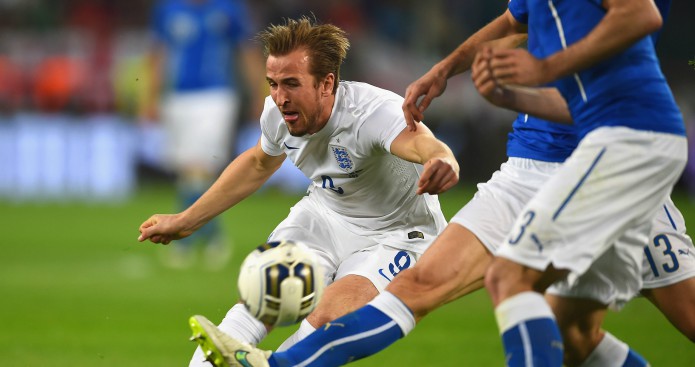 Juventus defender Giorgio Chiellini insists his thundering challenge welcoming Harry Kane to international football in 2015 was not deliberate but admits he knew even then he was up against a future star.

Kane was only two minutes into his full England debut during a friendly with Italy three years ago, when Chiellini made his introduction by crashing into his opposite number.

The pair will resume rivalries again at the Allianz Stadium on Tuesday as Spurs take on two-time European champions Juventus in the Champions League last 16. It is our one-on-one battle to watch.

Since that first meeting, Chiellini has established himself as one of the most dependable centre-halves in Europe while there is not one out-and-out striker more feared right now than Kane.

Chiellini claims there was nothing planned about his shuddering first impression on the then 24-year-old.

“I don’t actually remember it very well but in Turin he was certainly a great striker. I didn’t make that tackle on purpose!” Chiellini said with a smile.

“But in my opinion he was already then one of the best strikers. People had already talked about him a lot.

“This type of challenge for us as defenders give us an impetus to play football. These are the matches that we will keep in mind in the future.

“I know I judged him properly before because I considered him a great striker then and he has become a great international striker.”

Chiellini is at the heart of a four-man Juventus back-line that boasts the astonishing record of just one goal conceded in 16 matches.

But it is Kane, with eight goals in his last seven games and 36 in 37 overall this season, that was the talk of the Italian club’s pre-match press conference on Monday.

Kane remembered well his match-up with Chiellini for England. He admitted getting past the 33-year-old and, more importantly, Gianluigi Buffon in goal promises to be one of the toughest tests of his career.

“He’s an amazing defender,” Kane said. “On my first start for England, in the first five minutes he made a challenge and I had a dead leg for about five minutes.

“It was a good welcome to international football. We know how good their defence is as a whole and obviously their goalkeeper as well.”

Toby Alderweireld will miss the match, having only recently recovered from a hamstring tear.

Alderweireld played 90 minutes against Newport in the FA Cup last week and declared after the match he felt “very good” but was not included in the squad against Arsenal on Saturday and did not join Monday’s travelling party to Italy either.

“He is 28 and it was a massive injury that we need to take care and be cautious with because we cannot put his career at risk,” Mauricio Pochettino said.

“To play this type of game you need to be 200 per cent. Competing is not the same as training and that’s why we are caring about him with our plan.”