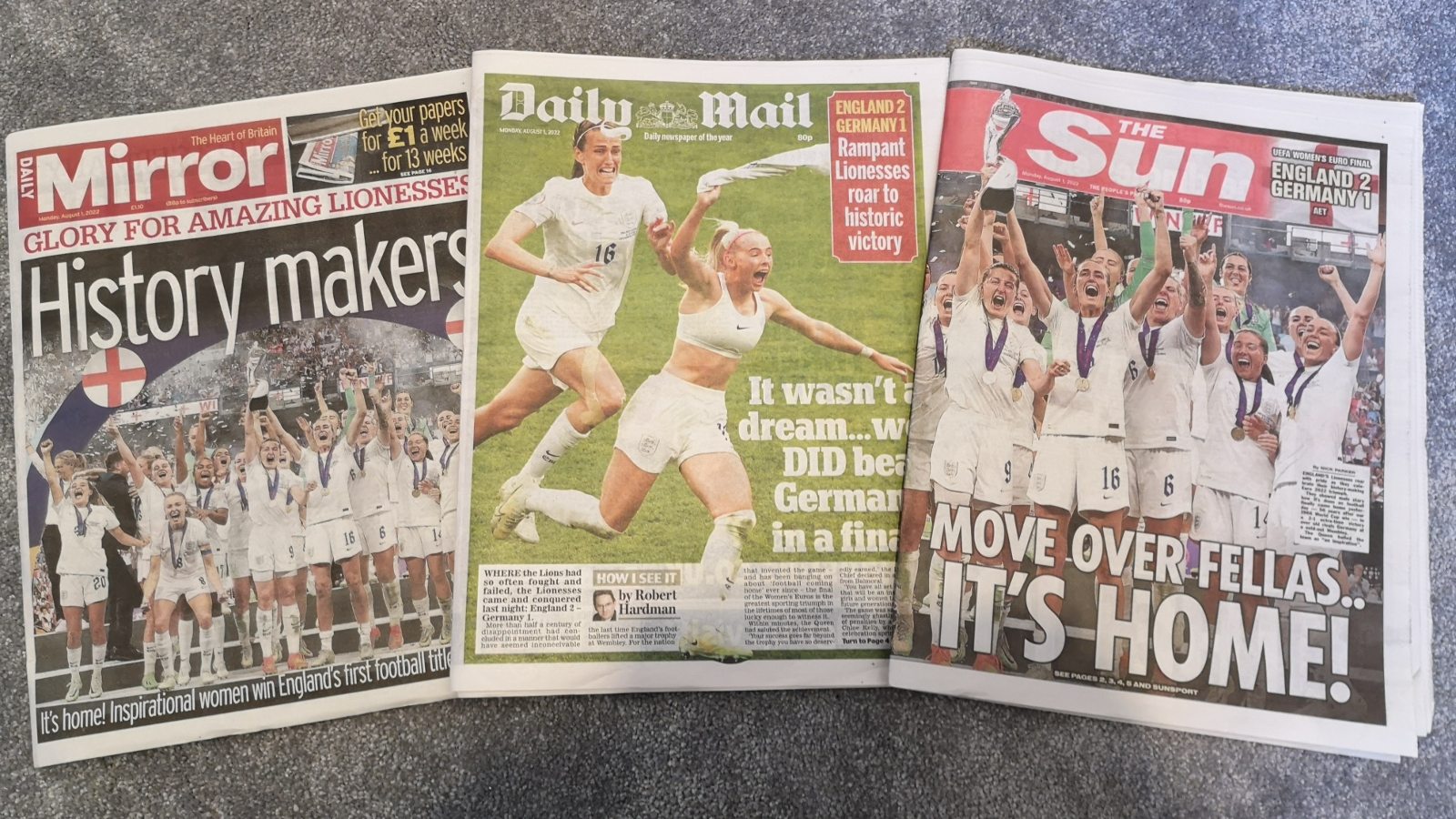 The Daily Mail asked a man obsessed with the Queen to write their front page on the England triumph. Of course they did.

It was the Queen wot won it
Robert Hardman is a 57-year-old Cambridge-educated journalist and author whose full range of published books are ‘Monarchy – The Royal Family At Work’, ‘Our Queen’, ‘Queen of the World’ and ‘Queen of our Times’. There is a subtle theme.

So when England won the European Championship on Sunday, who better to write the front page – the actual front page! – of the Daily Mail than Hardman?

It took him only three paragraphs to mention the Queen, which made her the very first person mentioned in his piece. Before the match-winner Chloe Kelly. Before the coach Sarina Wiegman. Before every single member of that England team.

‘Within minutes, the Queen had saluted the achievement.’

”Your success goes far beyond the trophy you have so deservedly earned,’ the Lioness-in-Chief declared in a statement from Balmoral.”

The Lioness-in-Chief?! Ladies and gentlemen, the Daily bloody Mail.

It’s been a longueur time coming
On the inside pages of the Daily Mail, highlights from Hardman’s piece include…

* ‘The Lionesses had trounced the titans of the women’s game – eight times champions, Germany were skippered by an ex-zookeeper.’

* ‘We steeled ourselves for those penalties and the time-honoured knuckle-chew followed by the time-honoured botching of the crucial spot kick. But no. Not this time. Chloe Kelly saw to that, hilariously taking the mantle of sporting progress one step further by whipping off her shirt, as some of the more excitable men have done for the past few years.’

* ‘On the flipside, all this niceness did make for a less gritty ambiance during the longueurs. There were cheers for every free kick in England’s favour, jeers for those that went against but there were moments we could have done with something more passionately partisan than dum-de-dum ‘Eng-land!’’

Agreed. We too yearned for a more gritty ambiance/ambience during the longueurs. Who didn’t?

Dance party
The actual sports pages of the Daily Mail do not disappoint, with seven pages devoted to the triumph. So of course the top story on MailOnline on Monday morning was…

‘Lionesses become party animals! Dancing, singing and posing with medals – and with the Euro 2022 trophy on ice in a crate of beers – England’s wild celebrations continue after making history’

We’re told that ‘England’s victorious Lionesses partied long into the night after their remarkable European Championship triumph on Sunday’. We’re pretty sure they did – they certainly deserved it – but the only details you have are from the Instagram feeds of the women themselves, and they only posted from the dressing-room and the team bus, which meant ‘long into the night’ was actually about 10pm.

And since when did being a ‘party animal’ and having ‘wild celebrations’ consist of ‘dancing, singing and posing with medals’?

What a thoroughly depressing narrative designed to pander to MailOnline readers who were more than happy to weigh in below the line with their despicable comments.

Over on The Sun website, they promise to take us ‘inside England’s wild all-night hotel celebrations with champagne and cocktails party until 4am after Euro 2022 win’.

Which is wonderful until you realise the only details available from ‘inside’ these ‘wild celebrations’ are that ‘the girls downed champagne and cocktails at the posh Lensbury Resort in Teddington, south west London until the early hours’.

It’s almost like they had just won the European f***ing Championship.

Gender wars
Over on the front page of The Sun, the headline: ‘MOVE OVER FELLAS…IT’S HOME.’

Apparently ‘they showed male stars how it’s done’. Nope. Pretty sure they just won a tournament with a phenomenal performance.

And again, the only name mentioned on that front page? The Queen. FFS.

What about the men? Don’t forget the men
The Daily Telegraph take: ‘Three lessons England men can learn from the Lionesses.’

Oh do bore off.

Live, laugh, love
On the Mirror website, they are concentrating on the real issues around this England women’s team:

We are told that captain Leah Williamson ‘appears to be private about her love life’, but that doesn’t stop the Mirror linking her with both England midfielder Keira Walsh and Arsenal teammate Jordan Nobbs. Because that seems perfectly fair and reasonable.

Incidentally, the Daily Star claim that Williamson is actually dating a man called Mason Childs, so it really is almost like it’s nobody’s business and nobody actually knows just from some idle Googling.

The Athletic really capturing the essence of yesterday. pic.twitter.com/uenBYBJ2pR