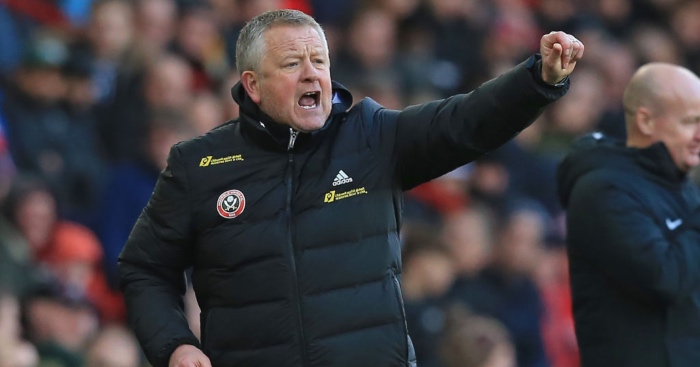 Sheffield United boss Chris Wilder admitted he’s a “bit controversial” in only giving his players a couple of days rest during their winter break, but wants to maintain momentum after their 2-1 comeback victory over Bournemouth.

The Blades started slowly and the visitors took the lead as Callum Wilson fired into the roof of Dean Henderson’s net early in the first half.

But Wilder’s side grew into the game and captain Billy Sharp deservedly drew them level on the stroke of half-time.

And in the second period United were largely dominant and John Lundstram came off the bench to earn them all three points and move them to within two points of Chelsea in fourth place.

Wilder told Match of the Day: “It was a great comeback. I thought the players grew into game and towards half-time we were creating pressure and momentum.

“I thought we really stepped on the gas in difficult conditions.

“There were some really good performances. Billy Sharp has not had a lot of game-time. He has had to be patient but he’s a fantastic leader in the dressing room. I’m delighted for Billy and I’m delighted for the team because we had to work hard against a talented side.

“We were hanging on at times. We grew into the game and I felt a goal was coming. I was delighted to go into the break on level terms.

“We try to build momentum and create pressure. They controlled the game early on but our reaction was great.

“We really went for it in the second half and the belief the boys have is amazing.

“I’m sure when we were coming off our fans were singing that we’re safe. We’re not there yet but there’s no let-up from us. There are no comfortable footballers in our changing room – they all have something to prove.”

While most Premier League managers have given their players time off to recuperate in the winter break, Wilder has opted to keep his players going to maintain momentum for the second half of the season.

He added: “I’m a bit controversial in that I’d want to carry on – I’d like it if we had a game next week. But we’ll come back refreshed for the next part of the season.

“We have just rolled on and taken the defeats on the chin. We’ll keep going. We have 39 points which is fabulous. We want to achieve something this season. We won’t take our foot off the gas. Our performance was one of belief and drive. There was a real drive about the players after going a goal down.”