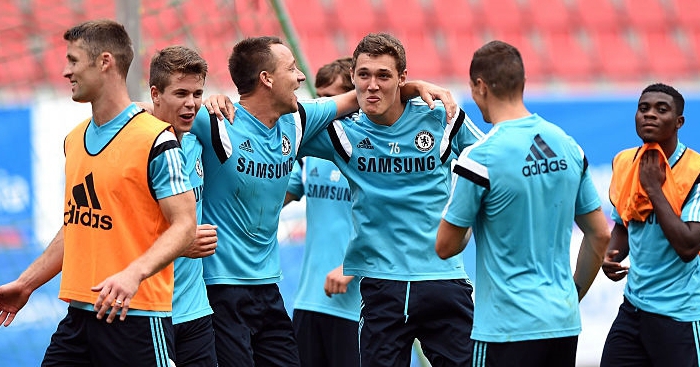 Andreas Christensen sought the advice of John Terry in an effort to iron out his mistakes at Chelsea.

Christensen has finally broken into the first team at Stamford Bridge this season after six years at the club.

The Dane has performed admirably at the heart of the Premier League champions’ defence, but has suffered some costly mishaps recently.

His mistake allowed Barcelona to score an equaliser in the first leg of their Champions League last-16 meeting last month.

The 21-year-old was also culpable for goals against Manchester United and Manchester City.

But he hopes to have overcome those problems after having “a smaller talk” with club legend Terry, whose place he has taken after the 37-year-old’s summerdeparture.

“I try to keep it inside the club and not bring it home with me,” Christensen told Eurosport in Denmark. “My team-mates have also seen all my other performances, so they know that these mistakes aren’t typical for me.

“I have had a smaller talk with John Terry, he has also experienced setbacks, and it is always nice to talk to someone watching it from the outside and to learn that they have experienced the same.

“He told me that it is natural to make mistakes. And he tried to put it in perspective for me saying that if a forward misses a chance he can make it good again by scoring when he gets the next opportunity, but we can’t change a goal scored against us.

“So when we make mistakes it is more crucial and it is easy to point fingers at. I have realized it, looked at it and now I have moved on.

“It has been difficult to get out of. You are not doubting yourself, but you might get a bit more cautious in what you do, and that can make things even worse.

“You just want to move on to the next match so that you can play a match without mistakes.

“I can’t avoid making mistakes, but in some games the mistakes have been decisive, so now I am just waiting for the next games to come, so I can prove that the mistakes aren’t typical for me.

“I thought about it after making two mistakes in two matches, that I might be out of the next one. But I try to tell myself that before these matches I have played all the other ones almost with no mistakes at all.

“I hope that is the reason that I get to start, because he knows that – besides the last couple of matches – he can trust me, I haven’t made any mistakes, but been very solid for a long period. I am focusing on all the good games I have played this season.”