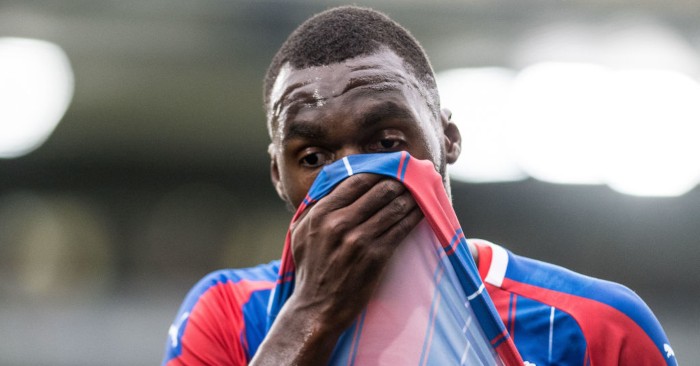 Crystal Palace’s two goals in that victory were both scored by Christian Benteke. His first was celebrated with a statuesque pose and puffed-out chest, as if to remind Liverpool supporters that he used to call this place home before he was deemed unwanted by Jurgen Klopp. They were Benteke’s 13th and 14th league goals of the season, two poacher’s efforts from a striker who had hauled his club to safety. Little evidence was offered of what might follow.

That was the fourth time in 2016/17 that Benteke had scored more than once in a match; he hasn’t done it in the two-and-a-half years since. Crystal Palace’s record signing has now scored four times in his last 58 club matches. Since that win at Anfield, Teemu Pukki has scored more Premier League goals; during that same time-frame, Pukki played an entire season at Brondby, moved to Norwich and played another full season in the Championship.

Benteke’s fall from grace is so infuriating because he had already done the hard part. Joining Aston Villa as a raw striker with experience only of the Belgian Jupiler League, he scored 42 league goals in 82 games for a side that regularly ranked low for chances created. If the move to Liverpool might have scuppered his career – the reverse Fernando Torres – Benteke hardly flunked at Anfield. No Liverpool player who started 12 or more league games that season had a better minutes-per-goal ratio. He wasn’t awful; he just didn’t fit in.

After moving to Palace, Benteke rediscovered his mojo. In 2016/17, only two players netted more goals for teams outside the top six and he outscored Jamie Vardy and Roberto Firmino. Benteke has stopped scoring at the same club in roughly the same conditions. That is truly rare.

Strikers cannot always explain why they score goals. The shot is a split-second action in which the player must react almost instantaneously to a combination of their exact position, the speed and direction of the ball and the location of opposition players that is always unique. That action is performed both on instinct and through the muscle memory of thousands of attempts over the course of a career. Ask even the most eloquent and analytic forward for their take and you might expect a simple answer: “It just happens.”

That is important because when a striker’s form falls away the tendency is to try and force the issue, yet ‘forcing’ goes entirely against the grain of what usually works. It deviates further from the natural thought process for a striker to go searching for chances. The only thing less helpful is the eventual opposite, when they start hoping they don’t get chances for fear of making another mistake. Both can be catastrophic.

Strikers fail far more than they succeed. Midfielders regularly register a passing accuracy in the higher 80%s, defenders make tackles and win headers more often than not and goalkeepers save far more shots than they allow past them. But the highest shot conversion of any regular Premier League striker over the last two seasons is 25.6% and the highest shot accuracy 69%. Neither Harry Kane nor Sergio Aguero, two of the league’s leading lights, have scored with more than one in six of their shots over that period or have hit the target with more than 60%.

In that context, the whole pursuit becomes an exercise in either banishing or learning to accept repeated failure. Whether you score or miss, forget about it and move onto the next one. As soon as a miss haunts you, your chances of success in the next unique set of circumstances decreases.

But that’s far easier said or written than done. A loss of confidence is typically more powerful than anything positive. It can undermine everything else achieved in a given game or a career. And, more pertinently, nothing helps. Your teammates talking you up feels like patronising special treatment that can provoke feelings of guilt (they should be concentrating on their game and instead they’re carrying me), but being ignored can quickly make the environment of team sport feel very lonely (I’m not pulling my weight and everyone is thinking it). Many of us go through the same thoughts in our own professions, but having that turmoil play out in the public eye must be devastating.

One of the indirect results of football’s rapid commercialisation is that pressure on individual players has increased dramatically. Everything matters more, and so everything you do matters more too. The decline in patience with managers is well-documented, but the same is true of players. A coach cannot afford to keep faith in under-performing players, or stick with a striker during a dry patch. Squads are deeper and have alternative options. If a drought extends into close season, transfer budgets may fund your replacement.

But Benteke can hardly plead a lack of patience. Palace don’t have many other forwards and have one of the lowest transfer kitties in the league.

“We give him lots of opportunities to practice everything that as a centre forward he needs to practice – attacking crosses, shooting, runs in and around the final third,” said Roy Hodgson last week. “And we try hard not to lay blame on him to any great extent, more than the blame that unfortunately will come his way from people who do watch the game, who will be saying ‘why doesn’t he score those goals?’ There’s not much more we can do.”

That speaks of a manager who has run out of options, and one who is is extremely grateful that Jordan Ayew has ended his own extended drought.

The remarkable aspect of Benteke’s decline is that he continues to insist that he has not lost any faith – this is not the typical story of the forlorn striker beating himself up. “I haven’t lost my confidence,” he said in a recent interview. “It’s more frustration because the thing that I was doing before – scoring goals – I can still do it.” That may well be purely a mental exercise (admitting weakness is admitting defeat) but Benteke also revealed that he has not used the services of a sports psychologist and doesn’t feel the need.

That feels like a misstep on his part. Visualisation, relaxation techniques, improved body language and positive reinforcement are all methods used by professionals within the game, and there are many who are happy to commend the positive impact upon their own careers by psychologists. The sheer length of Benteke’s goal drought surely suggests that thinking outside the box might help him improve inside it.

But within Benteke’s refusal to accept help lies an uncomfortable conclusion. As Maurizio Sarri said about Alvaro Morata last season: “I am not able to give him confidence. Alvaro has to gain confidence with one, two, three goals.”

And there is laid out the potential downward spiral: Goals are the only true medicine for a striker’s woes and the cure gets harder to find as the goalless run continues. There is no cheat code, no hard reset button. The only person who can restore Benteke to his former excellence is Benteke himself. But he’s the one person upon whom he is not able to rely. If instinct cannot be taught, it cannot be relearned either.