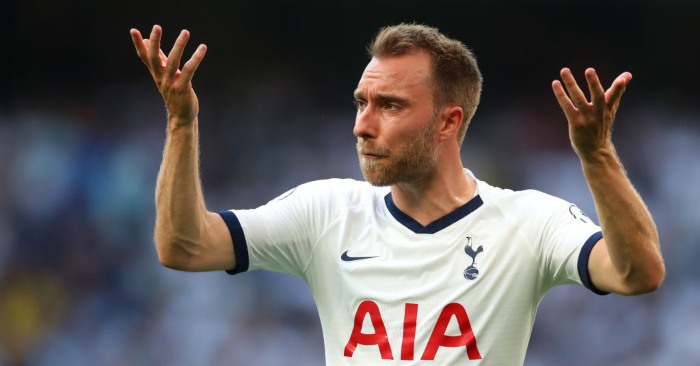 Christian Eriksen is never less comfortable than when asked to promote his own ability or influence. He deflects praise adeptly, insisting that the performance of the team is the whole of the truth. Praise is there to be accepted and appreciated, but never encouraged. If Zlatan Ibrahimovic has passed on the crown of the great Scandinavian footballer, the new king could not be more different to his predecessor.

“Of course it’s nice to get recognition, but I’m not looking for it. I just do my thing. If it comes, it comes,” he said in 2017. Mauricio Pochettino revealed that Eriksen is known as ‘Golazo’ at Tottenham due to his eye for a spectacular long-range shot or free-kick, but the moniker jars with the persona.

That ‘no ‘i’ in team’ mentality is exactly what we might expect from a player who was created at Ajax and sculpted by Pochettino: a club that requires total commitment to the process and a manager who has succeeded by demanding the same. Eriksen is humble by nature, but also by design.

And yet Eriksen’s resolution that his teams’ performances are more important than his own is flawed, for he is a bellwether player. When he plays well, Tottenham play well. When he suffers a dip in form or confidence, so do they. That can be a difficult responsibility to carry on your shoulders if you are naturally inclined not to raise your head above the parapet.

Eriksen is one of the best creators in European football; that assertion should not be controversial. Since arriving in England during a summer in which Tottenham desperately tried to waste their Gareth Bale proceeds, he has created 557 chances. That’s more than any other player, including those three great ever-present Premier League creators over the same period: Eden Hazard, David Silva and Mesut Ozil.

Since the start of 2016/17, Eriksen has created more than double the number of chances of any other Tottenham player. The accusation that he struggles to make an impact against the best opponents away from home is not without some merit, but then so do Tottenham. Is that his fault, or theirs? In any case, Eriksen did create more chances than anyone on either team over the two Champions League quarter-final legs against Manchester City last season. And over the last two campaigns, he has scored league goals against Manchester City (twice), Manchester United, Arsenal and Chelsea.

Forget statistics for now – goodness knows Eriksen takes no notice of them – and just watch Tottenham try and break down a team without him. This season, Spurs have scored 11 league goals during the 324 minutes he has spent on the pitch and no goals during the 126 minutes when he was absent. Witnessing them struggle against Newcastle was like watching a man try and pick a lock using only a plastic teaspoon.

But Eriksen’s creativity is not his superpower; his availability is. He has played in 186 of Tottenham’s 195 league games under Pochettino. At the age of 27, Eriksen has already amassed 535 senior career appearances. He remembers joining Ajax over Barcelona because he wanted to play as many minutes as possible. Tottenham have certainly made that dream a reality.

The standout statistic is this: Since he joined Tottenham in 2013, Cesar Azpilicueta is the only outfielder to play more Premier League minutes than Eriksen. That is an unprecedented workload for an attacking player in the modern era.

That would be impressive at any club, but rings particularly true at Tottenham. No player has better adapted his game – without blunting it – to match the demands of Pochettino’s high press than Eriksen. At Spurs, you attack in two ways: attack the goal when you have the ball, attack the opponent when you don’t. Before Pochettino, Tim Sherwood recalls telling Eriksen to go home from an empty training ground because it was getting dark.

Eriksen regularly covers more ground than any of his teammates in pursuit of possession, and is then expected to be calm immediately after winning it. That takes dedication and selflessness that was not required by the pure creators of yesteryear, and we would do well to remember that when critiquing modern attacking players.

“Of course it’s a new era, new times, a new way of playing football compared to back then,” Eriksen said in an interview in 2018. “They were different types, even more second strikers, than I am. Then they had even more freedom than I have.”

The pure creator doesn’t exist anymore. Mesut Ozil is probably the closest, and he has been frozen out at Arsenal. Instead, multi-functionality reigns supreme. Eriksen may look like an old-fashioned playmaker, but there is far more under the bonnet.

Eriksen is certainly not immune from criticism, most notably at the hands of his own supporters. But one reasonable argument is that he is merely a useful lightning rod for problems elsewhere in the team and – until now – a lack of squad depth that has made him far more workhorse than show pony.

Part of this criticism might come down to image. Eriksen is as far from the pistons pumping, cogs whirring attacking player as you could design. Mastering the immeasurables – touch, positioning, vision – can actually place a veil over your contribution. We are trained to notice attacking players when they get the ball, but most of Eriksen’s hard work comes without it.

At the heart of Eriksen’s style is a reliance upon simplicity. There are no bells and whistles to his game. If skills and tricks are performed, it is because they are the most logical and effective way of achieving the immediate goal – beating a man, disguising a pass, creating space.

“I think my team-mates know that if they play me the ball, they will get it back in the right way, with the right timing and with the right pace,” he told the Independent in March 2018. For such an attacking player, it is instructive that Eriksen says the player who most inspired him was Andres Iniesta.

That elegant simplicity, making the technically difficult look so easy, triggers memories of a north London icon of the past and it’s no coincidence. Eriksen was coached by Dennis Bergkamp during his first year at Ajax when so many of his on-pitch principles were established. “We worked on certain movements, learning how to measure his runs and then passing the ball to exactly the right place at exactly the right moment,” he said.

Simplicity on the pitch, and simplicity off it. Eriksen was the subject of regular rumours this summer and clearly wanted a move to Real Madrid. When he finally discussed that failed move on September 3, Eriksen was philosophical: “I wish I could decide just like in Football Manager, but unfortunately I can’t.”

That speaks of a man disappointed to miss out on his ambition, but one who wasn’t prepared to kick up a stink and thus unnecessarily complicate life. There were no late leaks from his agent to talk up his disillusionment, no emotional blackmail of Tottenham via a misguided PR drive. If he could have his way, he would have fallen asleep in London and woken up in Madrid.

Eriksen’s time as a Tottenham player looks to be drawing to an end. The current contract is running down and a new one remains pointedly unsigned. As a relationship nears its conclusion, reputations are rewritten in an attempt at self-preservation – let’s call it ‘never fancied her anyway’ syndrome. But Tottenham supporters should be advised against overlooking Eriksen’s influence and the example he sets.

“I am just a normal dude from a small town in Denmark – my feet are on the ground,” Eriksen said when he arrived in England. He will leave the same person, but a player transformed by the demands of the Premier League and Pochettino. Eriksen is a trailblazer for a new style of attacking midfielder, for whom artistry and application must be natural bedfellows. Few have acclimatised better than him. Like everything else, he makes it look simple.