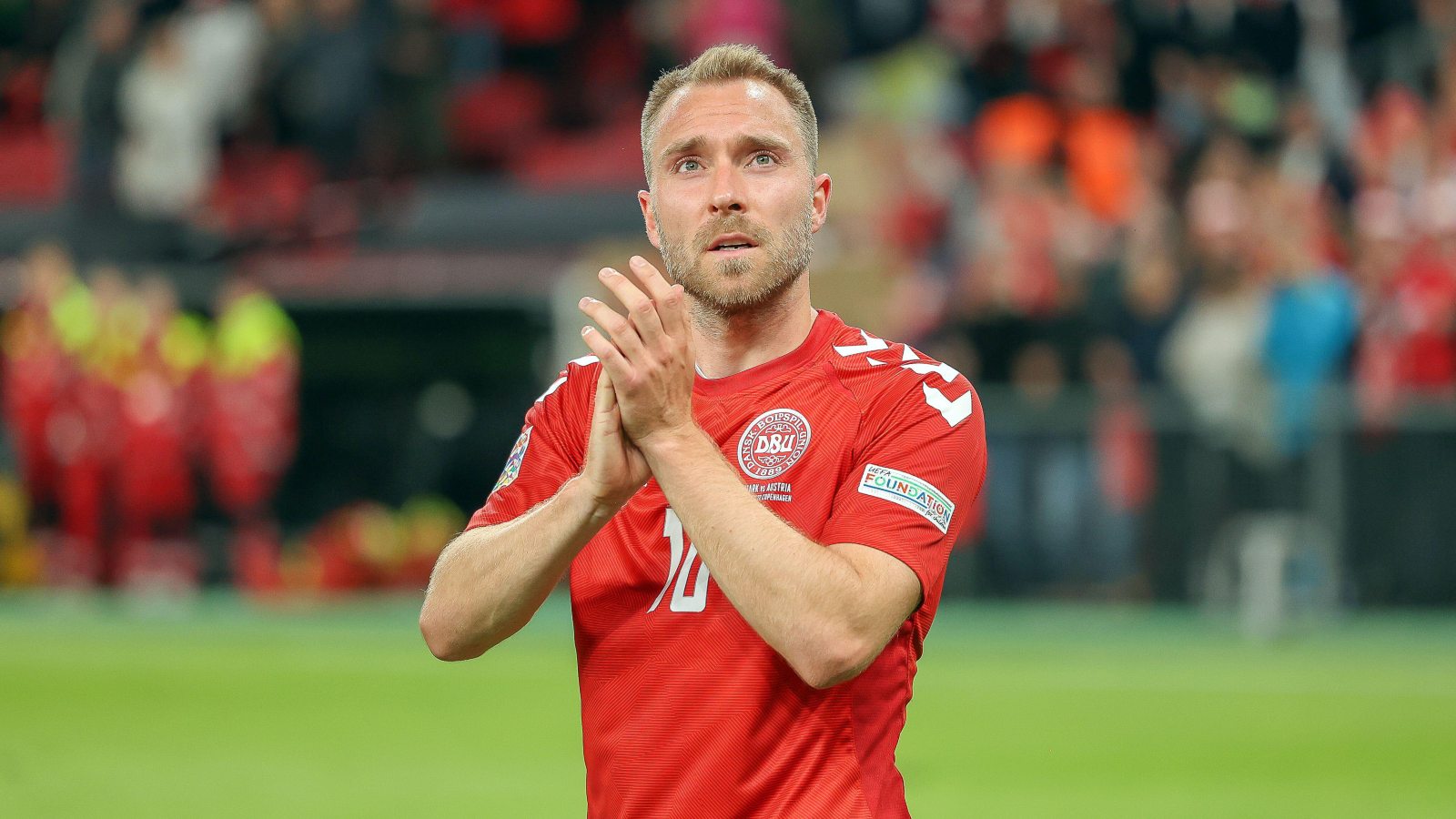 We like Christian Eriksen so we are a bit scared about him joining Manchester United, because they do terrible things to a chap.

Who’s this then?
Christian Dannemann Eriksen is a six-foot, 30-year-old Danish midfielder who is signing for Manchester United.

Born in the hilariously named Middelfart, he got his start for local academy Middelfart G & BK, moving onto Odense Boldklub in his early teens, helping them to win their league. As a very promising youth player he was scouted by Chelsea and by Barcelona and had trials with each club as well as for Real Madrid, Manchester United and Milan. But he fancied Ajax and rightly so as their youth development is second to none. He signed a two-and-a-half-year contract aged 16 in 2008.

By the time he was 18 he was playing for the first team, winning Ajax’s Talent Of The Year for 2010 and 2011 as well as Danish Talent Of The Year. He won three consecutive league titles with Ajax before opting not to renew his contract. At which point Daniel Levy skipped through the door, declaring he had £11 million in used notes for Ajax, if he’d like to come and play for Spurs, so in 2013 he did exactly that. That he wasn’t on the shopping list of more successful clubs than Tottenham now seems rather odd, especially given that he was relatively cheap.

He played 305 games across seven seasons for Spurs and won absolutely nothing with the club, losing a Champions League final and a League Cup final. However, his fantastic performances won him Player of the Year for 2013/14 and 2016/17 and Danish Footballer of the Year five years out of six from between 2013 and 2018.

In January 2020 he signed a four-and-a-half-year deal with Inter Milan and won Serie A that season but less than a year later was already on the transfer list, though Inter manager Antonio Conte said he’d keep him on. But then Euro 2020 intervened.

He’d been playing for Denmark since 2010 and was a crucial part of the side when he had a cardiac arrest in the 42nd minute of the Euro 2020 game against Finland.

Thankfully he recovered but found that Serie A rules meant that anyone with an implantable cardioverter-defibrillator wasn’t allowed to play. Who thought that up? Can’t quite see why that would be a rule. Seems mad. In December 2021 his contract was terminated, at which point Thomas Frank swooped in with his lovely hair wafting and took him to Brentford for half a season. He stabilised the club’s league position, reminded everyone how good he was and on the back of that, Manchester United decided to add him to their gallery of stars. It can only be hoped that they don’t make him significantly worse than he actually is, like pretty much every player in recent years.

Why the love?
Before his dramatic on-pitch collapse, Christian always had a lot of fans. At Spurs he brought a lot of class to the side from that progressive midfield position. There is a special place in fans’ hearts for the player who is the progressive midfield fulcrum tasked with making the pass that leads to a goal. The ability to find space between the lines, receive and pass the ball in tight spaces and have the vision to open up defences is possibly one of football’s most difficult roles and it takes a player with intelligence and understanding to be really bloody good at it. And Eriksen is that man.

Operating through the centre at the top of a diamond, or from wide on either side whipping crosses in, to watch him in full flight is to see a player who doesn’t even have to think about controlling the ball. Where some have to take two or three touches, he, seemingly without even trying, nails it immediately. I love that. It’s like seeing a guitarist who is in such command of their instrument that they don’t have to think about the technical stuff and can let the creativity flow unhindered from mind to finger.

On top of this, he can score some absolutely cracking dipping long-range strikes whether from dead ball situations or in open play. He’s actually scored 110 club goals in 538 games, which is a decent return, as is 38 in 115 international games.

However, to see anyone collapse and almost lose his grip on life itself, who was gone to the rainbow bridge for five minutes, is a profoundly upsetting thing for everyone to see. As Christian himself acknowledged he knew nothing about it, it was everyone else who were terrified. For a moment it seemed like he was gone. Then when he recovered consciousness after CPR, it seemed impossible he would ever play football again. And when he did play football again, it seemed unlikely he could reach the fitness levels and standard he had previously taken for granted. But he did. He did. It is a modern miracle and so it is no surprise that players feel warmly towards him. They all thought they saw his demise but here he is with the ball trying to beat them. You can see why it is an amazing thing for them.

A rare sort of footballer playing a role few can play as well is a great thing in itself, but the collapse has made the whole of the football family, fans, players and everyone else, feel warmly towards him just for surviving, as much as for being a fabulous footballer.

Future days?
It seems he’s going to sign a three-year deal at United on a free transfer. Now aged 30, he’ll be wanting to be a first-team regular. The worry for his fans is that he gets mired in the United mediocrity malaise. However, given he is working under a former Ajax boss who will surely understand exactly where and how to play Eriksen, perhaps this is less likely than has been the case for almost everyone else in the last decade.

The team certainly needed to add some class to the midfield with Paul Pogba now gone and he’s a no-nonsense player who will not mess anyone around or play games with the media. A near-death experience must give anyone perspective on what the important things in life are and what they aren’t.

So it seems like he will potentially be a superb signing (though how many times have we said that about a United signing?) even though there are plenty more gaps that need filling with quality in the United side and the new manager’s ability to shape the club into a properly functioning modern side remains moot. They have needed someone who can take free-kicks to a consistently high standard ever since David Beckham left. They win a lot of free-kicks within 30 yards of the goal and someone who can strike it as hard and true as Christian will be of enormous benefit, in contrast to CR7 who was frankly rancid at taking them.

But however it goes and however he plays at United, I think we can all agree it is just fantastic to see him playing at all. Welcome back from the edge, Christian.