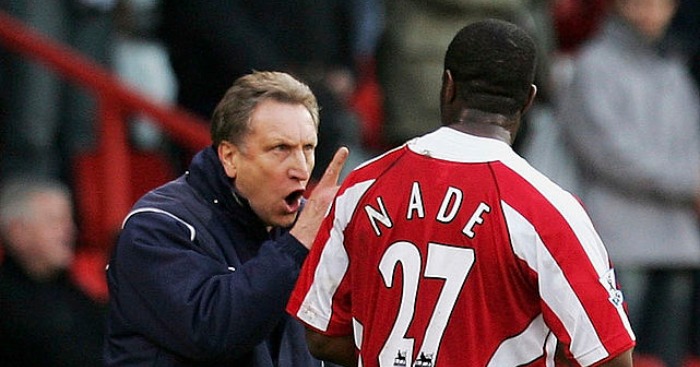 Love him or loathe him, there’s no denying Neil Warnock leaves a lasting impression on all who he comes across.

While at his beloved Sheffield United in 2006, he signed a young unknown French forward from Troyes AC by the name of Christian Nadé. A young Nadé would go on to become a Blades hero after netting the winner in a famous win over Arsenal.

Nadé, now 35, is still playing at Scottish lower-league side Annan Athletic. But he looks back fondly on his time under Warnock at Bramall Lane.

He told the Talkin Fitbaw podcast:

“I love the guy, I don’t think it’s possible that someone doesn’t love him.

“We’ve got a thing in France, when you lose a game, you come back home and nobody speaks on the bus, everyone scared to speak anyway.

“He’d be the one making atmosphere on the bus.

“The first time I remember we played Tottenham, we lost, and on the way back, he’s the one saying ‘Stop the bus, I get pizza for everyone!’ And everybody’s screaming and stuff and I’m like ‘we just lost what’s happening here?’

“He was amazing, he would come and say ‘Christian what are you doing tonight?’

“I would say I’ll just go home, he would then say ‘come with me, come chill with me, lets hang out together.’

“What kind of coach is this?”

Nadé admits he may not have always understood what the Blades gaffer was saying in the dressing room, but he made him feel 10ft tall:

“The thing is I couldn’t understand what he was saying, all I know there was a lot of F words and a lot of spitting when he was talking.

“What I love about the man is he wasn’t the best tactically or anything but the way he would fire you up to go on the pitch, I never felt something like this before.

“Through my career, nobody has managed to put a fire on my back to go on the pitch and forget everything you’ve got around you and just want to fight.

“That’s something he could bring to every club he’s been, that’s always the same thing I’ve heard, he’s not the best tactically or technically but he fired you up and as soon as you’re on the pitch you just want to fight for the guy.”