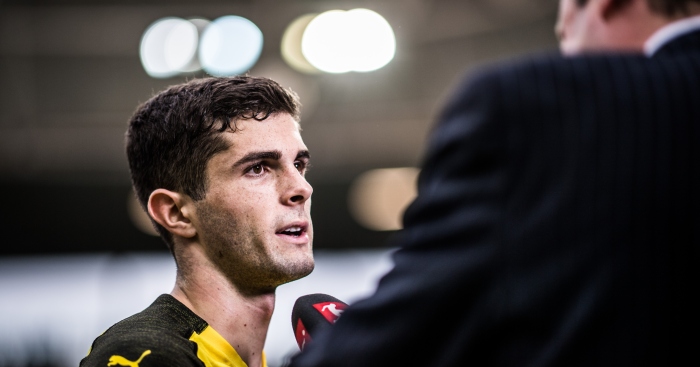 It can’t have made for easy watching. Borussia Dortmund’s yellow submarine had puffed and labored through a sterile 45 minutes against a Monaco side that had come to preserve rather than create, not much more than a shadow of the side that had zipped through to the Champions League’s last four a year and some months earlier. That heirship to the title of Europe’s thrilling young pretenders was supposed to have passed now to Dortmund, but during the first half on this chilly European night in Dortmund in October, something was askew – the gears were locked, the football wouldn’t flow.

How the team had missed Christian Pulisic, sidelined with a groin injury. This was the feeling at the forefront of minds at Signal Igunda Park, not least of all, one would think, Pulisic himself, watching on whilst the passes failed to find their targets and the football refused to ignite. For so many years now, or what seems like years – how easy is it to forget that Pulisic only made his debut in yellow and black in 2016? – those clever dribbles and surprising sleights of feet have negotiated on behalf of this team.

What then might the American have made of coach Lucien Favre’s half-time tweaking, swapping in the starlet young forward Jacob Bruun Larsen, so lauded this season for his kismetic connection with the season’s other spirited wonderkid, Jadon Sancho? What of the 18 year-old’s slide-rule pass that pulled three Monaco defenders out of the game and set up Bruun Larsen for the coolest of finishes? And then the ease with which the hosts slipped into gear once the deadlock was broken and the frustration was pricked?

The first surprise is that Dortmund’s electric beginning to the season is not because of Pulisic. The second is that it is happening largely without him. When he has played, the verve has not been consistently there, his indubitable class on the ball not so in evidence. The yellow revolution – say it quietly – seems almost to be happening in spite of the team’s hero and talisman.

Pulisic’s goals and assists are down. He’s making fewer dribbles, and the numbers show his passing isn’t as accurate. Manuel Veth, writing for Pro Soccer USA, flagged that the American playmaker is attempting 0.5 fewer runs with the ball per game than last season. On the only occasion this season when Dortmund have been up against a wall, he clocked less than 72% pass completion and lost the ball four times as the team lost 2-0 to Atletico in Madrid to end their unbeaten start to the year.

It’s possible that, after two-and-a-half intense years of little rest and colossal expectations, the demands being placed on a player who is yet to turn 21 are beginning to show. Pulisic has played over 100 first-team club matches since the winter of 2016. Last Friday at Wembley, he got a close-up look at what becomes of pushing a player too hard, too young: an international send-off at just 31 and a few short seasons grazing the pastures of MLS.

Wayne Rooney’s circus-style farewell for England against the US also gave Pulisic 90 minutes of pitch-time alongside Dortmund teammate Sancho, something that no longer seems guaranteed in the Bundesliga. With Favre seemingly set on Marco Reus as his number 10 and with just two more advanced midfield positions to fill, it’s not a stretch to see a future in which Sancho and Bruun Larsen play wide and a fit Pulisic sits out.

That in itself would surely leave him receptive to the furtive eyes being made in his direction by Chelsea, and the tick-tick of his contract counting down towards its 2020 expiry seems already to be hastening his departure for the Premier League.

But it’s the waning of his influence, the shrinking back of his contributions in this whirlwind Dortmund season that is the real story. For two years he has thrived as part of a team struggling to live up to expectation, playing at a raised level from those around him. Now that the team is flying, it is two new youngsters who are stealing the headlines, and the American is being written out of the story.

The clarion call is clear. Pulisic is a wonderful talent, with not yet three seasons of a fascinating career behind him. But he has been replaced as the Bundesliga’s breakout star, and both Dortmund and the league have profited from the new blood. Germany is ready to let its adopted son fly. New shores beckon.