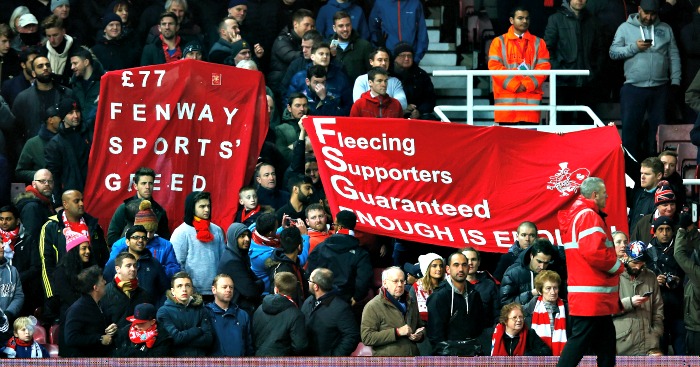 The principle is ludicrous, of course. If Arsenal vs Liverpool finishes at 6pm on Christmas Eve, as is eminently possible, Liverpool’s away supporters will not be able to get the train back home unless they manage to teleport into London Euston before 6.08pm. They face a four-hour car journey instead, assuming that there is no traffic on the roads and that the weather is set fair. That truly would be a Christmas miracle.

There is another option for those travelling Liverpool fans. They will miss the 6.30pm National Express coach from London Victoria, but will have plenty of time for dinner and merriment before the 11.30pm. That gets into Liverpool One bus station at 6.05am on Christmas morning. Put the turkey in the oven when you get in, love.

The prospect facing Newcastle United fans isn’t much more appealing. If they are selected for the 1.30pm game on the same day, supporters will have to get across London (I’ve heard the Westfield shopping centre is fun at that time of year) in time to catch the last train out of Kings Cross at 5pm. A super off-peak single on that route is £131.70, so Santa better be kind to you.

The casual workers at the two games hardly fare much better. West Ham and Arsenal are two Premier League clubs who do pay staff the living wage, but sub-contracted staff do not come under the terms of that agreement. Presumably they would rather be with their families on this of all days, rather than working for low pay before trudging home in the cold and dark.

The conclusion is pretty clear: Christmas Eve football is a disaster for a significant proportion of people looking to attend or work at the match. Supporters groups at all four clubs mentioned have made precisely that point. Whether anyone is listening remains the salient question.

The temptation here is to boo and hiss (is this the earliest recorded reference of a laboured pantomime pun?) at Sky Sports, the broadcaster responsible for Christmas Eve scheduling. Sky are determined to ruin Christmas with their Super Snowball Santa Stocking Sunday Special. Yet scratch beneath the surface a little, and that blame is clearly being misdirected.

Firstly, a history lesson. This would not be the first time that Premier League football has been played on Christmas Eve. In 1995, Leeds United beat Manchester United 3-1 at Elland Road, albeit involving a shorter return journey for away supporters. I’ve avoided the obvious Surrey gag for reasons of decency.

In fact, let’s go one better. It was the winter of 1976 that football was last played in Britain on Christmas Day, when Clydebank played St Mirren and and Alloa faced Cowdenbeath. Both were local-ish derbies, and so too was Blackburn vs Blackpool in 1959, the last time football was played in England on Christmas Day. Yet it would be interesting to know how many away supporters made the 90-mile journey to watch Wrexham lose 5-3 at Coventry on the same day.

‘Why shouldn’t Sky show two games on Christmas Eve?’ is the quasi-rhetorical question which is likely to generate a flurry of angry responses. But it is valid. Sky have paid £4.18bn for the rights to show matches, which includes a contractual allowance to broadcast two matches on a Sunday. Expecting them to do any different requires them to make a decision based on morality rather than logic or business sense.

We have had Sunday Christmas Eves before, of course, most recently in 2000 and 2006, but at that point Sky were the only host broadcaster and could therefore shift around games at will. One option for Sky would be to shift one of their Sunday games to the Friday 8pm slot, thus leaving Sunday 1.30pm as the last game and mitigating some of the issues. Yet even that is asking them to take a hit.

Rather than Sky receiving the ire of supporters, it is the clubs who are largely to blame. Liverpool, whose supporters would be most affected if the fixtures went ahead as proposed, received £148.4m in broadcasting revenues for the 2016/17, a total that will increase this season. Along with the Premier League’s other teams, they signed up for a deal that would allow their games to broadcast on television, including two on a Sunday. Either they negligently failed to spot the Christmas Eve 2017 snafu, or they wilfully ignored it.

Chelsea released an official statement in which they expressed their ‘sympathies to our supporters’ objections and it is a subject we have raised with the Premier League’, at which point you wonder whether someone in a glass-walled office in Sky’s headquarters in Isleworth shouted “hang on a f**king Stamford Bridge minute, are they for real?”.

Having entered into their slow dance with the devil, it is a little rich for clubs to now bleat on behalf of poor, neglected, loyal supporters. The same clubs don’t seem to pay much attention to the feelings of those supporters when they charge extortionate prices for tickets and merchandise, for example, or mind spending their wads of television cash on new players. Unfortunately, clubs didn’t agree upon a deal that allowed them to choose when, where and at what time of year they would be on TV. If they had, it would surely have been worth less.

There is also a certain irony to this story breaking at a time when the Premier League clubs are looking to maximise their windfall of a potential £11bn deal for non-domestic broadcasting rights, which includes the new ‘big six’ aiming to push out the other Premier League clubs and gain the majority of the money themselves. Not as worried about competition in the league as fixture timings then? Avarice is a full-time sin, not one that can be turned on and off to fit an agenda.

The one thing that cannot be doubted is the popularity of televised football on a Christmas Eve Sunday. As well as making a one-eyed ‘Why is it always Liverpool?’ plea, Jurgen Klopp last week said that he “could not imagine people would want to watch football on that night”.

Really? You can’t see that going to the pub on Christmas Eve lunch to watch the first game before bedding in on the sofa to watch the second, all before a night of eating and drinking in front of Christmas TV might be popular? Does Klopp know nothing of English culture? There are football fans who would happily watch a West Brom vs Brighton game over the Queen’s speech on Christmas Day, given half the chance. That Christmas Eve fixture between Leeds and Manchester United at Elland Road in 1995 was a sell-out, by the way.

There is an easy solution to this, of course, if not a perfect one. Clubs could either offer to pay back some of their broadcasting revenue to Sky as compensation for the lack of televised fixtures on Christmas Eve, and we have no games. Or the games could be televised, but the clubs pay for all the away tickets and put on travel for all those supporters. Let’s call it not a gesture of festive goodwill, but decency. Dip into that account marked ‘broadcasting revenues’ if petty cash runs dry.

Yet it is hard not to be very glum about the whole thing. Along with the Saturday 3pm television blackout, the lack of football on Christmas Eve and Christmas Day is one of the last bastions of traditionalism in a game now overcome by rampant commercialism, and now even that is being eroded. Last season saw Liverpool vs Manchester City finish at 7.20pm on New Year’s Eve, remember.

As ever, the latest developments are an example of match-going supporters being deliberately alienated by the sport they love. Watching football already costs a small fortune.

“What it clearly demonstrates if it happens is that the TV audience is more important than the match-going audience,” read a statement by Liverpool supporters’ group Spirit of Shankly. That’s entirely true, but not just to broadcasters; they matter more to your clubs too. Whatever they might say to the contrary.

Christmas Eve football is not the disease, merely the symptom. It is always the most committed that lose out. Loyalty makes football fans ripe for exploitation.