Home Johnny Nic Chelsea, Everton can get their hands off our hero of the week 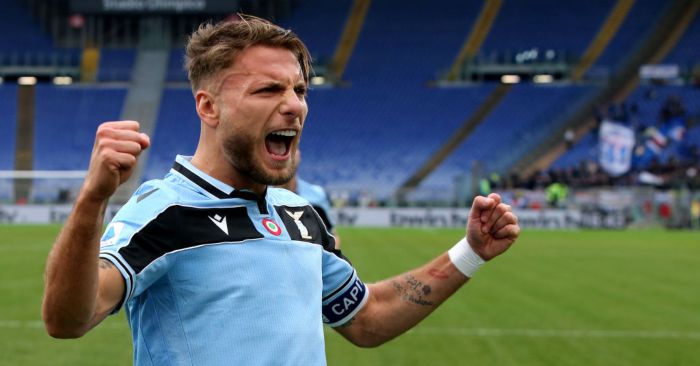 Who’s this week’s hero, Johnny?
This week’s hero is a rugged 29-year old 6′ 1″ striker from Torre Annunziata in Italy who is currently leading the European Golden Boot charts. He is in his fourth season playing for Lazio but has plied his not inconsiderable talents at a total of nine different clubs and is also a full international with ten goals in 39 games. His previous sides include Juventus, Siena, Grosseto, Pescara, Genoa, Torino, Borussia Dortmund and Sevilla but it is at Lazio where he’s really hit his straps. They are currently on an 11-game winning streak.

His goals this season have put Lazio in the title chase in Serie A. They are currently third, six points behind Juventus with a game in hand. One of those excellent European players who has never seemed to harbour any interest in coming to England – though that may be about to change – and he seems to find it easy to resist the Premier League. A striker who has scored more on his own than seven of the division’s 20 teams this season?

That’ll be Ciro Immobile, then.

What have they done to deserve this then?
Ciro netted a hat-trick this weekend in the 5-1 thrashing of Sampdoria and now stands on 23 goals in Serie A in just 19 matches, scoring 26 in 25 overall. This is a striker in imperious form in a side that Nicky Bandini describes as playing “unsparing vertical football, with players such as Luis Alberto and Sergej Milinkovic-Savic thriving in the support roles”.

His tally of 112 in 159 in his three-and-a-half seasons at Lazio bears comparison to some of the best in Europe but he is a striker who has been very much off the radar in England and has rarely been talked about as a potential signing…until now. Two weeks ago, Everton were being linked with a bid, but nothing has happened yet and it’s all gone a bit quiet.

This week, Chelsea were reported to have put out some feelers for him. They desperately need some additional firepower to take the burden off Tammy Abraham and are supposedly weighing up a move for him this month or in the summer. At 29 he’d have little resale value and would cost a lot of money, if indeed he were available at all.

Immobile has not talked of wanting to play in England to date in any interview I can find, but presumably Chelsea would pay him the GDP of Iceland per week, so that’ll help oil the wheels.

Lazio would be mad to sell him now, of course. But by the time the summer window comes around he will be 30 years old. Spending big on someone of that age is rarely thought to be a good idea, but then the whiff of desperation around Everton and Chelsea may drive them to do exactly that.

His career total of 189 goals in 354 tells its own story. He’s a top striker, if an unglamorous one who impresses by hard work, being primarily right-footed but actually good with both feet, delivering plenty of physical presence to score headers and providing fine approach play, as his five assists this season attest.

Two of his goals at the weekend were penalties. Lazio have had 13 this season due to their forceful, direct style of play causing defensive havoc. Rather pleasingly, he’s a fan of the old-school, long run-up blast-o-nomics, starting outside the box and advancing at speed to thrash it home. None of this three step, wait for the keeper to commit, too cool for school business; he gets some sodding leather on the thing.

He’s been called the most under-appreciated striker in Europe and there is a lot of truth to that. Even though his stats are impressive, his talent is not a flashy one. It does not come with bells and whistles, nor flashing neon lights. He doesn’t dribble really, only occasionally has a long-distance strike, isn’t a massive athletic physical specimen and doesn’t have a high speed sprint in him. James Richardson said this week that he doesn’t have natural grace and is rather dogged.

So what makes him so good? Timing. That’s what it is. Timing. The almost mystical ability to be in the right place at the right moment to score goals. And when the ball arrives, he dispatches it, often with a first-time hit or header.

But timing doesn’t look like much. Even when slowed down and replayed, it is an art form more for the purists. Those wanting tricky skills as a marker for quality are not likely to rate Ciro, yet without timing you are forever just short of the ball, or have overrun it, or simply stopped at the wrong moment and a chance that could’ve delivered a goal never even materialises.

You don’t score as many goals as he does without an extraordinary ability to time runs and have the vision to see the spaces to run into.

Anyone grumpy about it?
As he started his career at Juve – though only played for them five times – and is now firing Lazio into being title contenders, they must be looking over their shoulders somewhat resentful.

Of course, Lazio fans must be hoping that his stellar goalscoring isn’t going to lead to him being sold for an awful lot of cash to a greedy, moneybags English club. Perhaps his collapse of form when playing in Germany for Dortmund, only scoring three in 24 games, will put off overseas suitors.

Celtic were certainly not grumpy when he scored against them in the return Europa League tie in Rome tie because they went on to win 2-1. But in a way that did Lazio a favour, putting them out of Europe and letting them throw everything at a league title challenge.

What the people say
Interest in Italian football doesn’t seem very high in England. For some reason being interested in it makes you a hipster, or at least according to the tabloid mentality that is dispiritingly common currency. Being intellectually curious about anything that is not here is for nerds, weeds and the uncool, dontcha know?

So I knew there’d be a limited response to this. However, in an era where you can access any amount of excellent writing and podcasts that features Italian football, I used to find this odd. Then it was pointed out to me that the vast majority of England’s football fans are not even interested in Scottish football, indeed in any football that doesn’t involve their own club, so Italy stands little chance. This is something you tend to forget when you write a lot about the game and are always trying to vaguely stay across things and thus are not a ‘normal’ fan.

Even so, there is so much to enjoy in the Italian game right now; do at least listen to a podcast about it. TotallyFootball’s Golazzo on Tuesday is good, as is Steve Crossman’s 5 live Thursday offering.

Because I feared a low input I spoke to top Italy-based broadcaster and writer Sheridan Bird, a brilliant ex-Football365 columnist from bygone days, to find out how Ciro is seen in Italy.

“Immobile is devastating within a system dedicated to exploiting his gifts. The last two seasons prove that. He is one of the best counter-attacking forwards in club football. His finishes with either foot and is very opportunistic. Lazio’s Spanish schemer Luis Alberto and Immobile combine very well.

“Although he is too slight to be a totem-like No. 9, he is resistant and strong enough to hold off defenders as he races towards goal. But he is not a belligerent target man or granite-arsed battering ram. Immobile needs a sniff of a chance via a clever through ball or dozy defender making an error. He doesn’t thrive in isolation, which was partly the reason for his struggles in Germany.

“You can’t say he is among the best in world football, because the top defenders in Europe or international football have found ways to stop him. His starting place in Italy’s Euro 2020 XI is not guaranteed, because coach Roberto Mancini might not deploy a counter-attacking strategy. Approaching 30, Euro 2020 could be his last chance to make an impact on the biggest stage. That could be from the bench.

“Immobile is well-liked in Italy because he comes across as a cheerful, open and grateful person. He is known as Ciruzzo, an affectionate nickname. There doesn’t seem to be an edge to him. He has reacted angrily to one or two substitutions in the past, but that’s normal during a match. There is a pinch of drama lurking within because he is from the Naples region, where people are expressive and honest. But his flouncery levels are very low in comparison to his sensational scoring figures. Being a bubbly, optimistic person has helped him through tough times (Dortmund and Sevilla). Plus a very happy home life with his wife and three children gives him balance and strength. The videos his wife Jessica Melena posts on Instagram show a couple who genuinely enjoy life and each other’s company. As players, managers and owners or presidents will tell you, if a star is happy in his private life, everything flows on the pitch.”

Thanks for such a comprehensive look at our man, Sheridan, you old glamour puss.

Now to reader’s comments. Naturally, because we’re hipsters, we start with our old friend:

Point of convergence
Ruthlessly holds the spotlight
While midfielders shine

‘Many seem to focus on his failings at Dortmund and Sevilla, despite the fact that those were just two seasons, and he’s been brilliant for the others. A terrific forward who knows how to maximise his strong suits in the game.’

‘He’s quite close to the perfect modern forward and seems to have really benefited from the stability of being at one club for several years now.’

‘Was genuinely outstanding in both ties against Celtic, including a great finish on the volley in Rome. Still got pumped but personally, he’ll have been pleased with his performance, I assume.’

‘I sing his name to La Donna e Mobile.’

‘If we pretend Dortmund never happened, then we’re talking about an elite forward!’

‘Quality player. I think he and the Lazio manager Inzaghi will be in high demand in the summer. I hope they both stay with the Eagles.’

‘I always read his name in Pavarotti’s tenor. Doing so never fails to provide a slight jolt of amusement. Great old-fashioned English striker, too.’

The least appropriate name for an Italian footballer since Claudio Gentile

What does the future hold?
After years of wandering, he finally seems to have found a home in Lazio. “When I am playing and I hear the Lazio fans chant my name, this motivates me a lot,” he said recently. “I love to play for Lazio and it is an honour for me.”

It is to be hoped that he stays there and continues his fine form rather than become the latest expensive cut of meat to be ground up by the Premier League mincer which is often capable of making very good players into heavy-duty donkeys.

He is a player who has flourished later in his career, rather than as a youngster. He is a classic example of how finding the right club and the right setup is crucial for performance, perhaps especially with a striker.

It’ll be fascinating to see how he does this summer in the Euros. If he carries this good form into the championship he’ll be responsible for pushing Italy to the latter stages. Italy doing well in tournaments does seem part of the natural order of things.