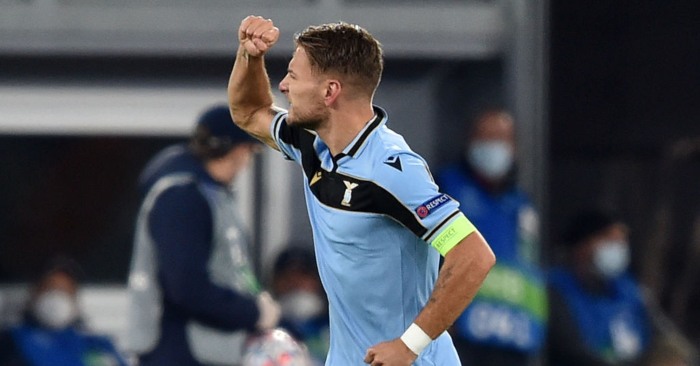 Ciro Immobile has been described as ‘underrated’ so many times that we may well have tipped over into a situation where the only thing that is truly underrated is the media’s capacity to come up with a new narrative. And yet, here we are again, looking at the phenomenal goalscoring exploits of the Italian machine and wondering why his name is rarely even mentioned in dispatches when discussing the elite strikers of Europe.

If the usual argument was a lack of exposure outside Italy then Tuesday night might have been the beginning of the end of that argument; when playing his first Champions League game for Lazio – with a barely believable 104 goals in 145 Serie A games under his belt – Immobile scored one goal with a deft touch and finish before setting up substitute Jean-Daniel Akpa-Akpro for Lazio’s third.

‣ 41 goals in his last 48 games.
‣ Six minutes to score against his former club.

“It was an emotional night, playing Champions League football after so many years,” said Immobile, whose only other Champions League games had come in Dortmund colours during a quite disastrous one-year spell that undoubtedly colours more opinions than four extraordinary seasons for Lazio. The club were making their first appearance in the Champions League group stage for 13 years. With all respect to Tommaso Rocchi, Lazio have a slightly better striker now.

He was roundly criticised for his performance for Italy against the Netherlands last week and the question remains whether Immobile is adaptable enough to work in a different system, but that matters not a jot when neither Lazio nor Immobile has any intention of breaking their bond. A club used to operating on the fringes of the elite has found a striker to match, though his extraordinary numbers suggest that he has earned rather more respect.

It is not an exact science but The Guardian’s 100 best footballers of 2019 featured Immobile at No. 63, just below Jorginho. This was a striker in the middle of a 36-goal Serie A season. There is an idea that he ‘only scores goals’, as if that were not the point of football. And as if that were actually true; Immobile is one of the hardest-working strikers in football. And then there is the notion that he ‘only scores goals in Italy’, a ridiculous argument that would negate the achievements of pretty much every Englishman who never sets foot outside his own country.

Immobile is one of only four players to win the Golden Shoe in the last decade. The fact that he did that while playing for Lazio and not for Barcelona or Real Madrid should surely count in his favour rather than against. Only Ronaldo, Lionel Messi and Robert Lewandowski have scored more goals than his 104 in one of Europe’s top five leagues since he joined Lazio. And yet many football fans could not pick him out of a line-up unless he was wearing a Lazio shirt, preferably with ‘Immobile’ on the back.

At 30, Immobile is presumably long past the point where he feels any need to prove himself outside Rome; he had no interest in multiplying his money at Newcastle this summer and has done nothing to attract attention other than score an extraordinary number of goals. He did it again on Tuesday night while everyone was distracted by the younger, shinier Erling Braut Haaland. The shadows suit him.