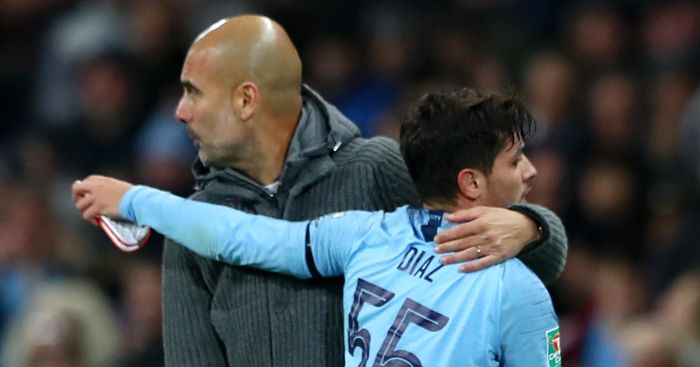 Brahim Diaz is closing in on a £15.5million move back to Spain after Manchester City reportedly agreed a deal with Real Madrid.

The 19-year-old has found it hard to get a regular place in Pep Guardiola’s first-team squad at the Etihad Stadium with no Premier League appearances to his name this season.

Diaz arrived at Man City three seasons ago from Malaga with Guardiola wanting to tie him down to the club for the long term – but the player has decided he wants to leave.

The Manchester Evening News reports that Diaz will move to Real in a deal that could eventually be worth £22million with a 15% sell-on clause also included.

However, the report adds that the percentage of a future sale would rise to 40% if he was sold to City’s arch-rivals Manchester United.

On Diaz’s situation, Guardiola recently said: “The case is simple: we want him.

“We want Brahim to renew for four or five more years and we will do whatever it takes for him to stay, but it’s in his hands.

“If he doesn’t want to stay, he has to leave.”We’ve protected him, but just like Sancho or Foden he has to decide, we can’t push anymore.

“These situations happen, for example, Cesc Fabregas didn’t want to stay at Barcelona and went to Arsenal.

“There are not so many players at 18 or 19 who play every weekend at the best teams in Europe… maybe one, Mbappe.

“In our team there is another opposite example: at that age, Silva went to Eibar, in the Second Division.

“We can’t do any more, and maybe he has realised that he can play more at another club.”