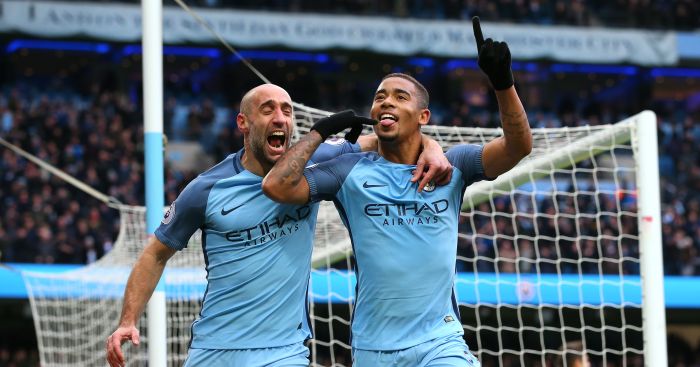 Manchester City striker Gabriel Jesus can succeed Lionel Messi as the greatest player in the world, according to Brazil legend Ronaldinho.

Jesus has been an instant hit since his January move from Palmeiras, establishing himself as a matchwinner and restricting Sergio Aguero to a watching brief from the bench, and Ronaldinho believes City have a real talent on their hands.

“Manchester City have a very special player with Gabriel Jesus,” he said. “Maybe even, in the future, the best player in the world.

“At the moment it is Messi. I have always said I think one day it will be Neymar. But at 19, in the future, it can be Gabriel. He has all the abilities to make that happen.”

“I don’t always agree that players should always be eased in — it depends on the type of player.

“You look at Gabriel Jesus and he has no fear at all. He just wants to play and show what he can do. He will put in big ­performances against Manchester United, Liverpool, Chelsea and all the other top teams in England.

“I’m pleased he has been named in the Champions League squad and I think he should play, he is full of confidence. Ronaldo, Kaka, myself and, more recently, Neymar were playing at the highest level at a young age. Gabriel is in that ­category.”