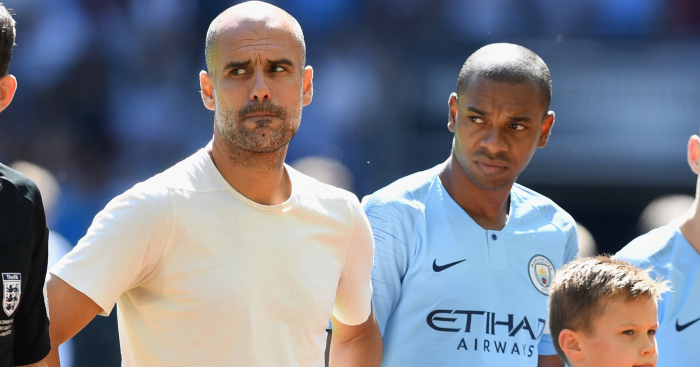 Fernandinho believes his best football is still ahead of him despite hearing his current form hailed as “incredible” by manager Pep Guardiola.

Manchester City boss Guardiola lavished praise on the Brazilian midfielder after an influential, goalscoring performance in the champions’ 5-0 Premier League demolition of Burnley on Saturday.

“Fernandinho made an extraordinary performance,” Guardiola said. “He was incredible, one of the best performances of the season and we’re delighted. He is a key player for us.”

Fernandinho was flattered by the compliments but will keep on striving to improve.

“It’s good to hear something like this about you, especially when it comes from Pep,” said the 33-year-old.

“He’s a special guy, a special manager and I’m so pleased for that, especially after my performance, the result was a huge step for us to grow in the competition.

“To keep on top of the table and scoring goals like this could maybe make the difference at the end of the season.”

Fernandinho feels the same goes for the team, who have started their title defence strongly with 23 points from their opening nine games.

“I hope that we can improve more now because we cannot stop now,” he said. “We are just at the beginning of the season.

“We have a long season ahead and I think from now until the end of the season we have to improve and get better and better. Otherwise, there’s no point playing for City.”

One area where Fernandinho does feel he is at his peak is in terms of physical fitness and he partially puts that down to his recent exclusion from the Brazil national side.

Asked if he felt fitter than ever, Fernandinho said: “Yes – I don’t know (why). When you are out of international duty you can forget just a little bit about football, spend more time with your family and clean your mind and your body.

“I think it helps a lot. I had a rest last week. I’ve been in Dubai for a week and I have enough time to rest.”

Fernandinho joined City from Shakhtar Donetsk in 2013 and is relishing his return to Ukraine to face his former club in Kharkiv in the Champions League on Tuesday.

“Of course I had very good times there and know a lot of people,” said Fernandinho, who spent eight seasons with Shakhtar. “I like them so much and have a lot of respect for them.

“It will be nice to go back there, see them and spend some time with them.”

The mutual appreciation between Fernandinho and Guardiola continued as the manager was asked about the player on his arrival in Ukraine on Monday.

Guardiola said: “I think Fernandinho would make every manager in the world the luckiest and happiest managers in the world. He is a special person to work alongside.”