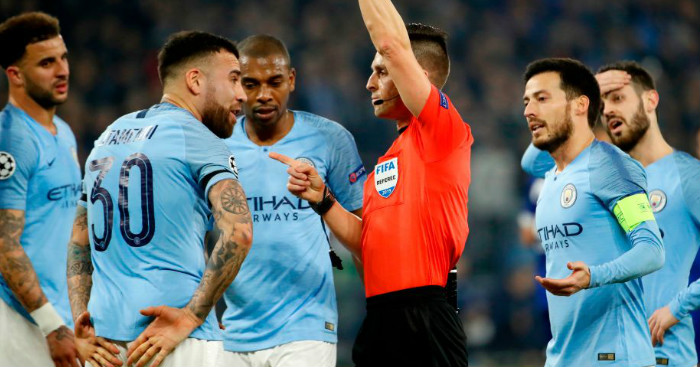 It was all going so routinely for Manchester City in Gelsenkirchen. Sergio Aguero had put the visitors 1-0 up in the 18th minute after David Silva robbed Salif Sane on the edge of the box and squared the ball to give the Argentine a virtual tap-in. This was surely the beginning of another easy night for Pep Guardiola’s side.

By half time they were 2-1 down after conceding two Nabil Bentaleb penalties, and Nicolas Otamendi’s dismissal for a second yellow card midway through the second half only served to compound matters.

Leroy Sane restored parity with a late, superbly-struck free kick, and Raheem Sterling got a winner in the dying seconds to give the expected result in the end. City will have no excuse if they fail to progress into the Champions League quarter finals: they have three away goals in their favour and a home second leg still to come. Respectfully to Schalke, it would be rather a shock if City were now to fail to progress.

But as difficult as it may be to do so, you could sympathise slightly with City on the first penalty decision that went against them: a handball against Nicolas Otamendi, given after a reasonably lengthy VAR review – regardless  of Guardiola’s admission that he thought the right decision had been made.

There was no doubt whatsoever that Daniel Caligiuri’s shot hit Otamendi in the forearm. But the Laws of the Game are quite specific that such offences need to be ‘deliberate’, and – given that the referee saw the incident and intially gave a corner – that VAR can only make such a decision if a ‘clear and obvious’ error has been made.

The incident highlighted some of the wrinkles in VAR that will need ironing out: it was not clear to the viewer at home what footage the video referees had used to make their decision, and part of the reason for the delay was that both sets of players utterly uselessly surrounded the referees as deliberations were ongoing, leading the official to have a word with both captains, for all the good that did.

But the VAR process was a red herring in this instance, and only served to obfuscate the fact that handball is the most opaquely muddy offence in the rule book. Since the International Football Association Board (IFAB) rather grandly insist on referring to the rules as ‘laws’, it seems only reasonable to treat them as such.

In law, it is usually necessary to prove the mens rea, or ‘guilty mind’, of a crime. Because accidents happen, it is not usually enough for an act to have taken place (the actus reus); it must also be shown that the responsible party had meant to do it, or should have known it may be harmful but went ahead anyway. The verdict in many criminal trials hinges on whether or not the jury believes the prosecution’s case that mens rea was present.

Most offences in football don’t require mens rea, which makes them ‘strict liability’ offences…much like getting caught speeding in your car, the act alone is sufficient for it to be criminal, regardless of whether you meant it or not. This is only sensible in sport: it would be unworkable, to say the least, to stipulate that own goals should only stand if you intended to turn the ball into your own net.

Handball is different, because it requires the referee to make a decision on mens rea: ‘did the player do this deliberately or not?’. There are no prosecution or defence lawyers making logical cases to a jury of 12 lay people over several days; rather, the official must make the decision immediately, based on having seen it once, with the naked eye, in real time. That seems virtually impossible to ascertain in all but the most blatant cases, like Luis Suarez against Ghana at the 2010 World Cup.

(For curious minds, the only other offences that require the referee to decide what a player’s mens rea was are all either rare, less serious, or more likely to be clear-cut: violent conduct, delaying the restart of play, leaving the field of play, playing a backpass, and defenders playing the ball to an opponent in an offside position are the only other laws carrying the ‘deliberate’ requirement.)

The officials’ jobs are only made harder by the Laws’ lack of specificity about what standard of evidence is required. In English criminal law, the standard is set at nothing less than beyond reasonable doubt (i.e. ‘I’m 99% sure they meant it’); in civil law, it’s usually fine to make a decision on balance of probabilities (i.e. ‘yeah, they probably meant it’).

This creates a huge contradiction. Because almost everything is strict liability in football, the standard has to be beyond reasonable doubt; yet it is impossible for any non-psychic referee to make a decision that reaches that standard for any handball except the most Suarezy cases. But lowering the standard to balance of probabilities would throw the door open to some absurdly soft handball decisions. But then where does that leave us with VAR’s requirement that any error be ‘clear and obvious’? Ugh. I need a sit down.

Thankfully, we may not have to wait too long for these issues to be resolved: a discussion of the handball law is already on the agenda for IFAB’s next AGM, which will take place on Saturday 2nd March.

Hi, The IFAB is aware that handball is one of the most debated areas of #LawsOfTheGame. This topic is included in agenda of our Annual General Meeting on 2nd March (https://t.co/J0F1M7C6RS)-looking for a more precise and detailed wording for different types of handball offences.

It is clear that the current law has been made with the best of intentions, but with fans, players and managers all demanding greater and greater clarity, the current wording leaves too much open to debate. It seems that the options would be to either reduce the penalty for non-clearly deliberate handballs to an indirect free kick inside the box, as with a backpass; to make handball a strict liability offence, which may seem draconian but would at least be clear; or to word the law such that a degree of interpretation from the officials is acknowledged and accepted.

Either that, or we all just need to grow up and accept that it’s a difficult area that will always be open to interpretation and just try to accept it when it doesn’t go our way. But I think we all know that’s not going to happen.