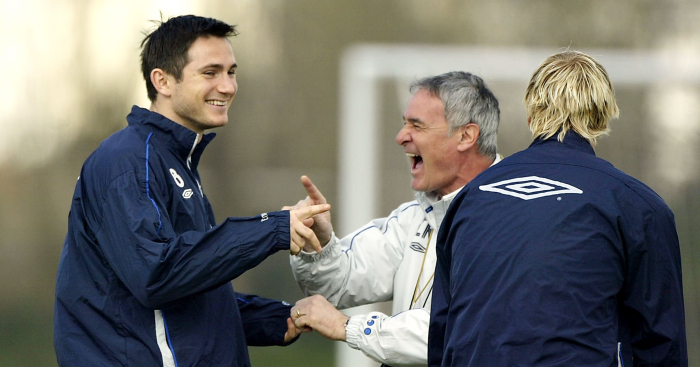 Are any of these lot available in January? New risk-free Fulham manager Claudio Ranieri might need to call in a few favours, so the seven players to have appeared more than 100 times under him in the Premier League should expect a call…

7) Gianfranco Zola (104 games)
“I will not rest him. I may be tinker man but I am not crazy man,” said Ranieri in October 2002, eulogising about a player who had started the season with eight goals in his first 11 Premier League games. The Chelsea manager hoped that his compatriot – “an old man” – would extend a contract that was to expire at the end of the campaign, but Zola bid Chelsea a memorable farewell after helping them secure Champions League qualification and with it Roman Abramovich’s transformative investment.

Ranieri inherited a 33-year-old Zola when he arrived at Chelsea in 2000, but had worked with the forward before. The pair first crossed paths at Napoli, when Ranieri bestowed upon Zola the No.10 shirt previously worn by Diego Maradona. A decade had passed at Stamford Bridge when the manager was still showing a similar loyalty towards youth. That pushed Zola towards the periphery at first, but the icon responded by basking in an Indian summer. He was named Chelsea’s Player of the Year before riding off into the Italian sunset in 2003. Ranieri was sacked a year later.

6) John Terry (108 games)
If John Terry truly is the ‘Captain, Leader, Legend’ that his adoring Chelsea support claim, then Ranieri deserves about one-third of the credit. It was he who first handed Terry the captaincy in December 2001, an occasion which Kevin Lisbie selfishly decided to ruin by scoring the only goal in a win for Charlton.

Marcel Desailly reprised the leadership role more often than not thereafter, but Terry became Chelsea’s de-facto captain during the Frenchman’s injury-hit final season in 2003/04. It was a change so natural that Jose Mourinho made it permanent when he became manager in 2004, anointing Terry the on-pitch commander of his Chelsea army. He would transform into one of Europe’s best centre-halves and captains under the Portuguese: a success Ranieri laid all the foundations for.

Chances of a reunion? Impossible while he is overshadowing actual Aston Villa manager Dean Smith.

5) Carlo Cudicini (110 games)
When Chelsea welcomed title-winning Leicester to Stamford Bridge on the final day of the 2015/16 season, Ranieri and his wily Foxes were given the warmest of receptions. The Blues had long surrendered any pretence of a successful defence of their Premier League crown during a difficult season, and were more than happy to pass the baton to England’s most unexpected champions.

Ranieri was greeted as an old friend, and it was Carlo Cudicini who was given the honour of presenting his compatriot with a special award. The former goalkeeper was Ranieri’s undisputed first choice at Chelsea after joining one year before the manager, making enough of an impression to be tipped for an England call-up. It just so happens that Cudicini played twice as many Premier League games under Ranieri as his next most-used goalkeeper, Kasper Schmeichel (55 games).

Chances of a reunion? He was happy being an ‘unusual figure’ at Chelsea last season, so probably not.

4) Frank Lampard (113 games)
Considering Frank Lampard did not reach the height of his powers until long after Ranieri left Chelsea in 2004, it remains impressive that only four players have ever scored more Premier League goals under the Italian. The midfielder was Ranieri’s most expensive Chelsea signing for two years before the sudden influx of money saw him outspend that £11m fee five times in the summer of 2003.

Lampard was named in his first PFA Premier League Team of the Year, reached double figures for goals in a single league season and scored in his first Champions League semi-final with Ranieri as his manager, as well as finishing second to a dominant Thierry Henry in the 2004 FWA Footballer of the Year. He realised his potential further under Mourinho but, as with long-time teammate Terry, Ranieri’s initial guidance was invaluable.

“I rank him as No 1 of all the players I have worked with,” Ranieri recalled in 2015. As someone who has managed Maradona, Claude Makelele, Riyad Mahrez and Carlton Cole, that is no small compliment.

Chances of a reunion? He is busy managing Frank Lampard’s Derby County, so slim at best.

2=) Eidur Gudjohnsen (120 games)
As a former teammate of Lionel Messi, Ronaldo, Ronaldinho, Thierry Henry, Xavi, Didier Drogba, Gareth Bale and Djimi Traore, as well as a former player for Jose Mourinho, Pep Guardiola and Frank Riijkard, Eidur Gudjohnsen made a habit of dining at football’s most elite tables. But the most productive spell of his entire career came with Ranieri at the helm. He scored 57 goals under the Italian, yet never breached 20 for any other manager.

“I thought four years under Ranieri was a bit of an indifferent time. We didn’t reach, I thought, the potential of the team or the squad in those four years,” Gudjohnsen told The Guardian in 2004. As true as that was of Chelsea as a whole, the Iceland legend was never quite as personally effective elsewhere.

Chances of a reunion? He’s 40 and has been retired for two years, but could probably still do a job.

2=) Mario Melchiot (120 games)
No player captures the essence of Ranieri quite like Mario Melchiot. The right-back’s first Premier League game under the Italian came as a half-time substitute for Jon Harley in a 3-3 draw against Manchester United, his second was a start in a 3-0 win over Liverpool, and his third saw Chelsea lose 1-0 to ten-man Sunderland. From the majestic to the maddening is a neat microcosm of the brilliance of Claudio.

Melchiot even played a crucial role in Ranieri’s most memorable moment at Chelsea. The Dutchman was one of the manager’s three bizarre substitutions in the 2004 Champions League semi-final defeat to Monaco, being replaced by Jimmy Floyd Hasselbaink when the scores were level at 1-1. Scott Parker took his place at right-back – followed by Robert Huth – as Chelsea surprisingly conceded twice in the final 12 minutes.

Chances of a reunion? #mmlove

1) Jimmy Floyd Hasselbaink (130 games)
In terms of the Premier League’s most underrated players, Jimmy Floyd Hasselbaink would rank highly. He is a two-time Golden Boot winner, the first non-English player to claim the award, and one of only three overall to win it with two different clubs. He could score with either foot, boasted as much pace and poise as he did power, and was as skilful as he was surprisingly effective in the air. Only 12 players have scored more goals in the competition’s history.

Hasselbaink and Ranieri never truly saw eye to eye, but they had plenty of opportunity to get used to one another’s company. The former spent two years in the Premier League with Leeds before heading to Atletico Madrid in 1999 and scoring 33 goals in his first and only season. His manager during that solitary season in Spain? Ranieri, who resigned before he was pushed after relegation.

Chelsea were quick to activate a clause in Hasselbaink’s contract to sign him for £15m in May 2000, and the Dutchman was surely delighted to see Gianluca Vialli replaced with Ranieri four months later. Despite publicly criticising his manager on more than one occasion, more than half of his 127 Premier League strikes (68) came under the Italian.

Chances of a reunion? Please make it happen.