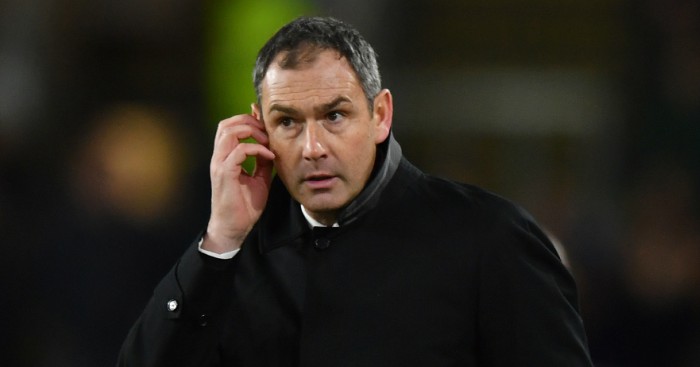 Under-pressure Swansea boss Paul Clement says he does not feel he is one game from the sack.

Clement’s position has come under fierce scrutiny after four successive defeats left Swansea one place and three points off the bottom of the Premier League table.

Swansea are the only team in the bottom five not to have parted company with their manager this season following Tony Pulis’ departure from West Brom on Monday.

But Clement insists he has the backing of the club’s American owners Steve Kaplan and Jason Levien and chairman Huw Jenkins.

“The owners are very supportive of my position here,” Clement said at his press conference before Saturday’s home game against Bournemouth.

“That is what we have to focus on, getting a better performance.

“We don’t know if we will get the win on Saturday because there is a lot of randomness in football.

“But what we have to do is improve our levels which have not been good enough over the last couple of weeks.”

Clement achieved hero status last season after being appointed in at the start of January with the club in a seemingly hopeless relegation battle.

Swansea survived as Clement took 29 points from 19 games, but their predicament this season is summed up by the fact they have scored only seven times in 12 matches.

Asked if he felt that defeat would mark the end of his 10-month reign, Clement replied: “No, I don’t get that impression at all.

“I see and meet the chairman every day, he is present at the training ground.

“We discuss all different matters on a daily basis and I have regular conversations with our majority owners Steve and Jason. The communication remains open and positive.

“I know I need to improve the performance of the team. That needs to be the starting point to get them playing better.

“We’re sad we’re not performing as well as we can and with our position in the league, but we’ve still got belief that we can turn it around.”

Kaplan attended last week’s timid 2-0 defeat at Burnley, which was their seventh defeat in eight games in all competitions.

“I did not speak to him in detail after the game,” Clement said.

“He came in before the game to wish us the best and I had a text off him later as he headed to London.

“Of course, the media put me in the spotlight, but it does not change the way I prepare or what my goal is.

“I focus on my job and the things I can affect, which are the players, training, selection, tactics and the meetings.

“There are certain things I am not in control of, and I choose not to pay too much attention to those.”