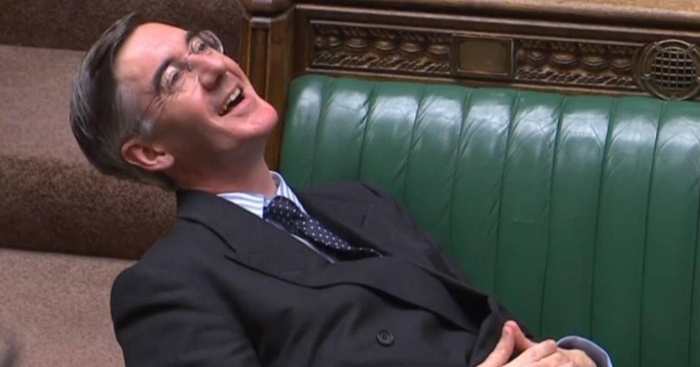 Jacob Rees-Mogg really needs to go to watch cricket more. He hasn’t got the hang of being a team player yet.

If Dominic Cummings is the rottweiler they say, he will surely have given the Leader of the House the hair-dryer treatment for the decadent image that will appear on a thousand election posters next month. It was the political equivalent of writing the opposing manager’s pre-match speech for him.

At a time when affairs of state have become little more than a succession of narrow numerical wins and losses, Westminster has to learn from sport that the result is not everything. How you win and lose is just as important. Sport needs that.

The rhetoric of respecting the Referendum result is empty without respect for your vanquished opponent. Post-match handshakes are largely ceremonial but they are not refused lightly in sport; they are precious symbols of the spirit, of the communion of competition. I didn’t see Boris and Jezza press flesh on Tuesday night.

Calling someone a ‘great big girl’s blouse’ during a commentary would probably end my broadcast career. Is that parliamentary privilege or something? What an example.

Rees-Mogg makes himself an easy target. But the smug, dismissive contempt in his voice is sneeringly disrespectful. Sean Dyche can dig out a referee pretty brutally but at least he usually concedes ‘they’ve got a difficult job’. Football is not always a happy family but it tries to preserve family values. We are all in it together.

Parliament now seems set apart from the rest of us. Football must never go there.

By reducing this momentous national decision to a confusing schedule of procedure and formulae, the people that represent us have lost most of us. The bigger picture of economic and social impact is never even discussed anymore. It is like one of those VAR debates on Match of the Day.

Don’t worry people, this is a football blog.

The comparisons and analogies between sport and politics soon run out when you consider the weighty impact of Commons votes. Parliament may look like WrestleMania at times but it is for real. The eventual losers don’t get relegated; they get made redundant.

What sport can learn from the nightly political theatre we are now witnessing is that the public will soon tire if they cannot engage with it. The ultimate indictment of our politicians’ self-important posturing is that they have succeeded in making the country bored of Brexit, bored of something that will change our lives.

Football is becoming bored of VAR. It is our version of the back-stop. In fact, in the Premier League it seems it is ONLY a back-stop. If any referee ever has cause to refer to those pitchside monitors, he will find they have fallen into sleep mode and in need of a reboot.

We have dissected and debated VAR into a muddle. It was only ever meant to help, never to solve. It is our expectations of VAR that are plaguing it. Far from taking the opinion out of football, it has created a whole new layer of experts and analysis. When technology needs Peter Walton to explain it, it’s maybe not quite ready.

Handball is the real curse on the game right now. Just as proroguing our rowdy Houses was a measure dreamt up for times of plague, famine and war, so handball was originally written into the ancient laws to stop outfield players punching and catching the ball. ‘Deliberate’ was the only word in the rule book that mattered.

Then somebody with a ‘better’ education than most of us in football took it upon themselves to try to define ‘deliberate’. The moment this exercise in legal drafting began, the spirit of the law started to disappear into scholastic conceptualising on a par with Standing Order 24. Football is many things but it is not scholastic.

Rather than defusing the constant pressure on the fourth official to try to account for someone else’s opinion, VAR has created an expectation of certainty that actually heightens the indignation of touchline managers when it cannot quite deliver that certainty.

The indignation swells to popular unrest when tens of thousands of paying customers are locked out of the process. No emotion is stronger than suspicion. It is not the curtailing of celebrations that is the problem. We will get used to that. It’s the mistrust of the technology and its application that spawns the outrage towards this ‘big brother’ moving in on the compelling chaos of our game.

I like VAR. There, I’ve said it! But I am committed to liking VAR simply if it reduces the number of incorrect decisions. I don’t see it as a cure-all, any more than I do my personal preference to remain in the EU. I just think it’s better than the alternative. I don’t know for sure that I’m right but I have tried to consider all the evidence.

All the evidence suggests VAR should improve decision-making in football but its enforcement has got to take football with it.

That team ethic that is central to football and other such sports has led to a situation where on-field referees are now wary of giving decisions that may prove debatable or downright wrong on review, and VAR officials are wary of overruling their colleagues.

Of course, there is a referees’ union. It’s tighter than the players’ union when you look at the lengths that footballers will go to get their fellow professionals into trouble. If you want to know why officials stick together, go and watch some parks football this Sunday morning.

Like the country, football has much bigger issues than the ones that fill the headlines. How we deal with dodgy decisions and offside armpits will only mirror our capacity to come to terms with racism, financial malpractice and mental health within the game. It really will.

However high the next Neymar fee is, however many clubs there are in the next version of the Champions League or the World Cup, football must not lose touch with its public, with its electorate.

As a sports media, we have a major function and responsibility in that process. We can’t just fuel expectations, then report on the difficulties in putting out the resulting blaze. We must not allow people to get bored of what is important.

There always seems to be a Brexit-like cliff edge looming in football that someone or something manages to draw back from. Bury disappeared over that edge last week. Football’s collective duty of care failed them. If anything should mitigate our rabid expectations of football, it is this.

Mutual respect is key to sporting competition. It puts our combative expectations into some perspective. There will be sledging out in the middle at Old Trafford this week that even John Bercow would struggle to silence, and when the tellers count the total runs scored, the result will be respected.

But only as much as the honest endeavours of those on the losing side. Team spirit is about recognising the claims of the other team too.