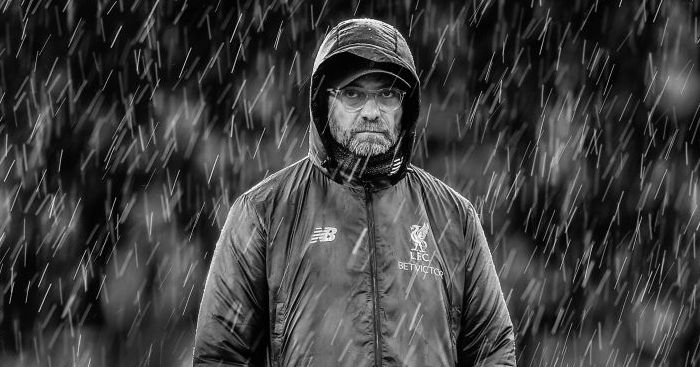 The title race looks over after Liverpool brushed Manchester City aside on Sunday. The Reds hold an eight-point advantage at Premier League summit. What could possibly go wrong? Well…

Liverpool’s thin squad may cost them
Jurgen Klopp chose not to strengthen his squad from a position of, erm, strength during the summer, preferring instead to trust the Champions League-winning players at his disposal. So far, it is difficult to build a case to say he was wrong to keep his money in his pocket. But the real test is yet to come.

Through the first three months of the season, Klopp has been without only a couple of first-teamers for a period longer than a single Premier League game. The Reds coped without Alisson in the sticks for two months and while Joel Matip’s injury could be seen as a bigger blow following his early-season form, it vindicated Klopp’s decision to make Dejan Lovren stick around, despite his initial desire to move on rather than sit and stew as a fourth-choice centre-back.

Where are Liverpool most vulnerable to injury? Where there is creativity, you will struggle to find depth. Should any of Klopp’s front three be struck down for any significant period of time, the Reds may be in bother. Divock Origi serves as stand-in to Sadio Mane, Mo Salah and Roberto Firmino and though the Belgium striker has his uses, he would only ever be a pale imitation of whichever of the front three he has to replace. Though Alex Oxlade-Chamberlain could be an option.

That trio is served so plentifully by Klopp’s full-backs but there is precious little cover for them too. James Milner and Joe Gomez could fill Andrew Robertson and Trent Alexander-Arnold’s boots, but would they be able to offer the same creativity should the first choice full-backs be crocked?

The games will come thick and fast in the coming months and that is when Klopp’s squad choices will be scrutinised most intensely.

Manchester City’s misfortune can’t continue
In the same way Klopp has been fortunate with injuries, Pep Guardiola’s luck has deserted him in the opening three months of the season.

Guardiola certainly should shoulder some of the blame. City lost one of their centre-backs in summer when Vincent Kompany decided his time was up. Rather than replace the former skipper, Guardiola decided that it wasn’t worth the cost or hassle. A mistake? Absolutely. But the City boss has been punished extremely harshly.

On only one matchday – the first – has Guardiola been able to select from his full complement of three centre-backs. Since then, his best defender Aymeric Laporte has been struck down for the season and John Stones has missed two chunks of matches.

Elsewhere, City are fortunate to be better covered. Leroy Sane was seriously hurt before the season kicked off but at least Guardiola can cope with the winger’s absence. Had Liverpool lost one of their first-choice front three prior to the start of the campaign, they would have been in far deeper trouble.

City’s form has to improve and it is hard to envisage that it won’t. But the same could be said of their luck.

Doing just enough will surely cost Liverpool
Weirdly, Liverpool chose their toughest game in the last seven to finally win by more than a single-goal margin. Okay, you get no more points for a whooping than you do for jammy smash and grab, but Liverpool really have done just enough for much of the season.

In the three matches prior to Sunday, Klopp’s men had to take points from losing positions and on a number of other occasions, they have been pushed all the way by opponents with plans more cunning than whatever it was Guardiola was plotting on Sunday.

The fixture list looks straightforward for Liverpool in the five games they play before going to the World Club Championship but Klopp will be up against managers with no obligation and, in some cases, no intention of going toe-to-toe with his side. The likes of Palace, Watford and Brighton will be happy to lean on the ropes and take the punches before waiting for their chance to land a blow, just as Sheffield United and Villa did.

Liverpool had to rely on Dean Henderson chucking one in to finally see off the Blades, while Villa eventually relented late on despite frustrating Liverpool as well as any opponent this season. Klopp referred to his players as ‘mentality monsters’ but champions – even Sir Alex Ferguson’s in 1999 who were renowned for late fight-backs – do not continually go behind and give themselves mountains to climb. Eventually, some they might find impossible to scale.

Liverpool have more than Manchester City to worry about
Although Sunday’s game was built up as one of two title deciders this season, the table as a consequence of the result offers a clearer picture of the task facing City and Liverpool.

City dropped to fourth after defeat, with Leicester and Chelsea leapfrogging Guardiola’s side to become Liverpool’s closest company. The table aside, you could make good cases for either side being better placed to push Liverpool.

Unlike City, Leicester don’t appear to have any discernible weakness. They have the Premier League’s stingiest defence; the division’s top scorer; and between those two units, Brendan Rodgers has helped to build a midfield that can outfight or out-think perhaps any other.

Chelsea too look strong, despite all the reasons they shouldn’t. A transfer ban and the introduction of young players across Frank Lampard’s defence, midfield and attack led everyone to write Chelsea off as title contenders, but the Blues have lost only once since the opening weekend, with that defeat a narrow 2-1 loss to Liverpool. Lampard’s side are only likely to grow stronger, especially if, as they suspect, their transfer ban will be lifted in time for January.

Should Liverpool hit some bumps in the road, then not only are City looking to capitalise, but Leicester and Chelsea too can turn the screw.

Football is f*cking weird
It certainly felt on Sunday that the title race was won. But we are not yet even a third of the way into the season and the mental months are yet to come.

Far bigger leads at the summit have been blown with far fewer games to play than the 26 Liverpool and their rivals have facing them between now and May. When you factor in cup matches, it is not inconceivable that Liverpool could have 40 games to negotiate. With a thin squad, that must be a concern.

Manchester United and Arsenal were both chased down more quickly from even more commanding positions – and Sir Alex Ferguson and Arsene Wenger’s runners-up had experience of being successful in the title race. Fergie’s side were 11 points clear in February 1998 while Wenger’s men let slip an eight-point advantage – the same as Liverpool’s – in March 2003. Newcastle, who were rookies in the title race, chucked away a 17-point lead in 1995.

So while they may look home and hosed, there are six months and two-thirds of the season left for Liverpool to get through without choking and cocking it all up.