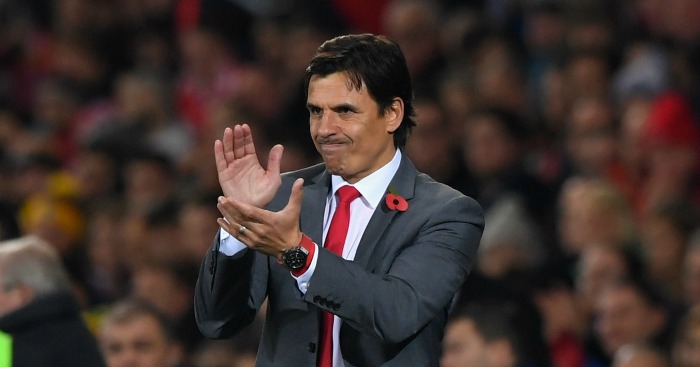 Chris Coleman has resigned as coach of the Welsh national team as he prepares  a new challenge with struggling Championship side Sunderland.

The Football Association of Wales confirmed Coleman’s departure on Friday night, with the 47-year-old expected to be appointed Sunderland manager in the next 48 hours.

Coleman was appointed Wales manager in extremely difficult circumstances in January 2012 following the death of his great friend Gary Speed.

The former Fulham and Real Sociedad boss struggled at first and Wales’ 6-1 World Cup qualifying defeat in Serbia led to some fans calling for his dismissal.

But Coleman was to lead Wales to their first major tournament for 58 years and took them to the semi-finals of Euro 2016.

Ford said: “The FAW and Wales as a nation will be eternally grateful for the job he has done over the last six years as national team manager, from travelling the length and breadth of Wales outside of the media spotlight to talk to players and supporters, to guiding us to the semi-finals of the European Championships.

“We wish Chris the very best of luck for the future as he returns to club management, a desire for which he has always been honest and open about.”

Assistant manager Kit Symons has also resigned and is expected to join Coleman at the Stadium of Light.

Wales’ failure to qualify for the 2018 World Cup triggered a break clause in Coleman’s contract that Sunderland were able to take advantage of.

The Black Cats parted company with Simon Grayson 18 days ago and had been linked with several candidates in that time.

There was speculation that Northern Ireland boss Michael O’Neill had turned down an opportunity to manage the club and Barnsley’s Paul Heckingbottom had also been heavily linked with the vacancy.

Heckingbottom was a trainee at Sunderland, but it emerged on Friday that he was not in consideration.

Coleman will inherit a club in a state if flux on and off the pitch with financial constraints having severely hampered predecessors David Moyes and Grayson and the Black Cats in danger of suffering successive relegations.

They lie at the foot of the Sky Bet Championship table ahead of Saturday’s clash with Millwall, for which Robbie Stockdale will be in charge, and have not won a league game on their own pitch since December last year.

Taking the Sunderland job will mean a return to club management for the first time in five years for Coleman.

Coleman took his first job when 33, managing Fulham after retiring early due to injury.

He took them to ninth in the Premier League but lost his job in 2007 and moved to Real Sociedad.

Coleman spent six months in Spain before returning to England with Coventry but left two years later before a short spell with Greek side AEL.

He took over Wales at a dark period in their history but led the nation to its greatest-ever success.

Coleman signed a two-year deal prior to the 2018 World Cup qualifiers and said it would be his last campaign.

But he had considered backtracking on that promise before Sunderland persuaded him to head to the north-east.