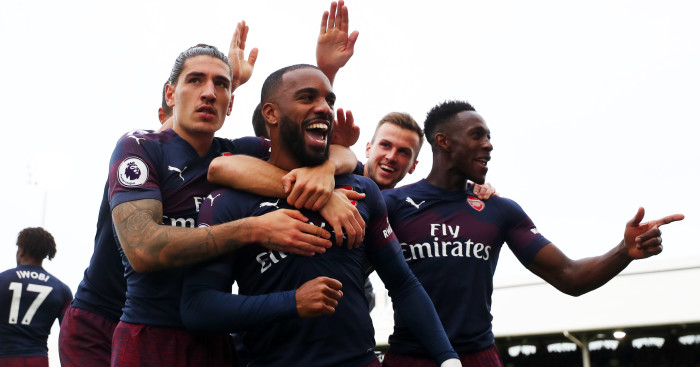 I am a one in ten
Anybody want to give Stan Collymore a lesson in percentages? Maybe start with some simple counting? He may be ‘the man who always speaks his mind’ but his mind clearly does not understand mathematics.

As we pointed out at the time, winning 85 to 90 per cent of home games would mean winning 16 or 17 of 19 home games; they had already drawn two. And to put that achievement into context, only five teams have managed to win 16 or 17 home games in the last five Premier League seasons – Manchester City (twice), Spurs, Chelsea and Liverpool.

Now he is back, tempering any Arsenal excitement by writing: ‘The vast majority of your players are still those Arsene Wenger left and that means your side will win 90 per cent of their games and lose the other fixtures they’re expected to lose, that means no titles.’

If Arsenal win 90 per cent of their games they will amass 102 points. Not only will they win the title but they will set a new Premier League points record in the process. Huzzah.

One question: Is the away game at Wolves one of the four games Stan expects Arsenal to lose?

Arsenal are sh*t
While Stan Collymore is accidentally predicting Arsenal will run away with the title, Paul Merson was on Sky Sports putting the boot into a side that has won nine games in a row in all competitions.

“Sooner or later they will be on the end of a big score – defensively they are all over the place. The one thing that gets them out of trouble is that they’re always going to score goals. But defensively, they are just not good enough.”

Oh and they have conceded a massive eight goals in nine games. So this is definitely the right time to give them a right proper kicking (when you’re a Chelsea fan).

Question of the day
Is the ‘secret’ behind every Premier League manager’s revolution the banning of sugary drinks?

Maybe he should teach them some defending instead.

Load of old c**k
Mediawatch appreciates that there is tangible desperation to come up with a new angle on every Jose Mourinho story, but are we really buying the notion that ‘JOSE MOURINHO risks another rap for his little finger gesture – amid claims he is mocking a critic over their small manhood’, as claimed by The Sun?

So the FA – already investigating him about his comments in Portuguese into a TV camera – could charge him for waving his little finger around? Yes, that seems perfectly reasonable and absolutely within the remit of the FA, who can ‘rap’ managers willy and indeed nilly if Twitter decides that the gesture is ‘suggesting that someone is less than well-endowed’.

Anybody else do a little sick in their mouth?

Incidental of the day
From the Daily Mail on England’s new call-up: ‘Dunk has worked hard to iron out his flaws. In that promotion season, he picked up 12 yellow cards. Dunk’s father, a plumber, has helped instil greater discipline, as has a psychologist from the Brighton academy.’

Sexy time
It’s international week so the Daily Mail are pretending that they are interested in the Championship. Apparently it’s ‘full of famous clubs, big crowds and glamour managers’. And ‘with Thierry Henry set to bring his va-va-voom, it’s THE NEW ROCK ‘N’ ROLL’.

Anybody want to take a guess how many paragraphs Matt Barlow writes about Va Va Voom Town (yes, really) before he mentions the team at the actual top of the Championship? Answer at the bottom of the page.

Cause and effect
Writes Martin Samuel in the Daily Mail:

‘Nuno Espirito Santo has named an unchanged starting XI for the first eight matches of the season, the only manager in the history of the Premier League to do so.

‘Just as well Wolves have won four of their last five league games, or he’d be accused of having no plan B.’

If they hadn’t won four of their last five league games, he would have probably made changes, Martin. As well you sodding know.

Echo bitch
Usually the most shameless headline of any day is to be found in the Manchester Evening News, but sister site the Liverpool Echo have stepped up to the mantle with this beauty/monstrosity as international week begins:

The cheeky bugger. What has he said?

Well this, ladies and gentlemen, is exactly what he said:

“And on January 1 you will see us at the Etihad Stadium.”

And with that he proved that he ‘anticipates Liverpool will still be in contention by the time they make the short journey down the East Lancs Road’.

And thus they are ‘going nowhere’.

It’s only Tuesday, fellas. Save this absolute horseshit for later in the week.

Yes, he has been sent a damning message by one Andrew Flintoff. It’s the one message they all dread.

Mourinho count
Number of times the word ‘Mourinho’ appears on the football homepage of the Daily Express website: A lovely round 100.

How neat. How desperate.

A slight difference of opinion
Neil Custis in The Sun: ‘JOSE MOURINHO will have clear the air talks with Ed Woodward in the next 48 hours ahead of a club board meeting on Thursday. The Manchester United boss and executive vice chairman will meet in London with Mourinho’s job still in doubt.’

Samuel Luckhurst in the Manchester Evening News: ‘Jose Mourinho is due to attend a meeting with Manchester United officials later this week. The MEN has learnt senior club figures and Mourinho are expected to attend a meeting that was described as ‘routine’ and deliberately scheduled for the international week, so as not to distract Mourinho from his managerial duties.’

Recommended reading of the day
Matt Pearson on Jadon Sancho