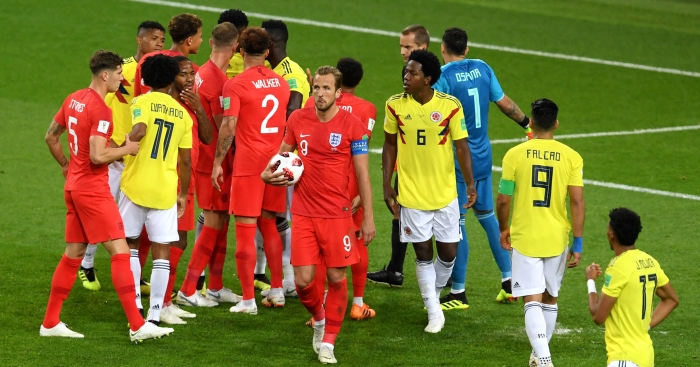 Harry Kane gave England a 57th-minute lead when he converted a penalty he had earned after he was wrestled to the floor by Colombian midfielder Carlos Sanchez at a corner.

It was a call that had been coming as American referee Mark Geiger struggled to maintain control during a contest littered with shoving matches before set-pieces.

But the South Americans equalised from a corner of their own when Barcelona defender Yerry Mina thumped a header home in the 93rd minute. Extra time ebbed and flowed with England finishing strongest and then prevailing 4-3 on penalties to send Colombia home.

While you’re here, read 16 Conclusions on the game. Then our player ratings. Then come back to finish this story.

“We’ve been knocked out because we missed a penalty after a draw,” Pekerman told reporters.

“The match was very rough. There were many situations (at set-pieces), as expected, everyone knew it would like this.

“A lot was said about both sides’ set-pieces and we have to defend football. It’s been very uncomfortable playing this match, knowing that feeling was in the air, about refereeing decisions.

“Something is happening in football – there is a lot of confusion.

“What if a player falls because he fakes a fall, because he’s being pushed by an opponent, or they’re trying to get the referee to book another player? There is a lot of confusion on this matter at the moment.”

He then changed the subject, and said “England have a very good team”, but returned to his theme when asked about his players’ regular arguments with Geiger.

“I know they weren’t happy before this match because there were lots of remarks – many unfounded comments – so I don’t think this is fair,” he said.

“I don’t think people in England or elsewhere should think about Colombian players like this. These matches are very competitive.

“England have a great aerial threat: they collide and fall in the box, there were penalties against Panama.

“You have to try and stand in the shoes of these players. They are subjected to situations which shouldn’t be present in football.

“These interruptions are bad, of course they are. Sometimes you have to repeat a free-kick or whatever but when there are so many fouls and interruptions that’s no good. We have to find the right balance so that football can happen.

“We shouldn’t only look at Colombian players, people should look at England players. I wish I was wrong, but I think from the next match England will be much more careful Today, it was far too obvious.”