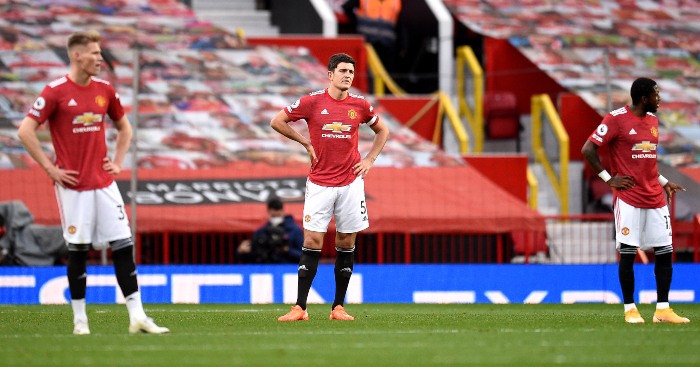 We all have (virtual) bad days at the office. Sometimes, professional footballers can look so incompetent that it stays with you. Remember some of these from the season so far?

1) Man United’s comedy quartet
Manchester United’s general incompetence at home is a given these days. It started badly with a 3-1 shellacking by Crystal Palace. Worse was to follow. The unsynchronised hamstrung quartet of Pogba, Bailly, Maguire and Shaw took the biscuit in the lead-up to Tottenham’s equaliser during the 6-1 massacre at Old Trafford. The amateur head tennis followed by the Shaw seat-of-his-pants finale is truly a fitting alternative to any lack of panto this year. As the Guardian said: ‘Spurs’ equaliser might have been found in a West End comedy.’ Not sure if it was that polished…

🤩 There’s a scramble in the penalty box and Tottenham Hotspur midfielder Tanguy Ndombele smashed in the equaliser for Spurs.#THFC #COYS #MUNTOTpic.twitter.com/TTLZgnsm9d

2) Fulham’s penalty woes
Not content with playing intricate football outside their own box to prove they can at least concede while looking nice, Fulham have developed a variety of penalty-takers, all of whom make 12 yards look like at least 30. Aleksandar Mitrovic blasted one over against Sheffield United while Ivan Cavaleiro slipped up to clear the rugby posts by some margin. In between, Ademola Lookman attempted a Panenka that Lukasz Fabianksi patted down like a deflated cottage pie. Maybe Scott Parker needs to ditch the suit and put the work overalls on.

3) Adrian goes AWOL v Aston Villa
Adrian has turned into Liverpool’s least-loved light entertainer – someone who doesn’t know where the punchline is while his set collapses in on itself. After getting no laughs for gifting Aston Villa the lead in October, his crowning glory occurred six goals later. The Spaniard simply ran across his line without a working radar while Ollie Watkins thudded an effort against the bar in the other direction.

Adrian with the maddest-shittest bit of goalkeeping I’ve ever seen pic.twitter.com/dTsZN6p4OX

4) Arsenal losing their sh*t v Villa
What is it about Aston Villa that brings out the heebie-jeebies in previously functional teams? When the Midlands club walloped Arsenal at the Emirates just before the second international break, the Gunners could literally not put a foot right. Jonathan Liew described Willian’s contribution as ‘drunk’. However, it was Kieran Tierney who took the plaudits for discombobulation with his epic fall after an electric shock from a passing football.

5) Man City get the wrong side. Five times
You’re playing Leicester. Jamie Vardy has scored a hat-trick against you before. You go in front. Then you clear a pathway to your own net so that Jamie and his friend Harvey can run into big green spaces. It’s a tease! First, Kyle Walker gets the wrong side of the roadrunner. Penalty. Secondly, Eric Garcia, complete with rugby headguard, takes Vardy out. Penalty. Not wanting to be left out, Benjy Mendy hauls over James Maddison. Penalty. The incompetence is complete when Rodri claims Leicester were lucky and football isn’t fair. Not playing anymore.

6) Brighton taking aim at themselves
Brighton are the experts of incompetence in not nailing a result. On Saturday, they were worthy of the 2-1 lead against Villa, but then Tariq Lamptey went into uncontrolled hyperdrive with two yellows and, minutes later, Solly March decided to take a swing at Trezeguet in the penalty area. What kind of team equalises in the 95th minute after hitting the bar three times, missing numerous chances, and then contrives to lose the match (to Man United) in the 100th after the final whistle is blown? It’s potty. Not a reference to the manager but, really, Brighton could do with avoiding black cats.

7) Chelsea got lost in the Black Country

“It was mistakes – clear mistakes – that cost us. You can have as many meetings as you want but with those mistakes you give yourself a mountain to climb.”

Frank Lampard’s team gave the neutrals 45 minutes of sheer slapstick against West Brom. Willy Caballero, Marcos Alonso and Thiago Silva all looked like they had just been taken out of the attic. Alonso, who was hooked off at half-time, then tried to watch the second half of the match on the team coach rather than with the Chelsea substitutes. The Spaniard was just doing what he had on the pitch – making no attempt to locate human life.

8) Jordan Pickford’s greatest kicks
Pickford has had his knockers since he came back from Russia 2018, but this season has taken a particularly sinister turn. The Everton keeper’s performances have made Joaquin Phoenix’s Joker look restrained. First, there was a House of Flying Daggers assault on Virgil Van Dijk. A few weeks later, Pickford attempted a similar failed manoeuvre to bone-crush Harry Maguire. To cap it all off, Jordan does seem ever more addicted to a dive.

No goalkeeper dives for balls going miles wide with such eagerness as Jordan Pickford. Quite impressive.