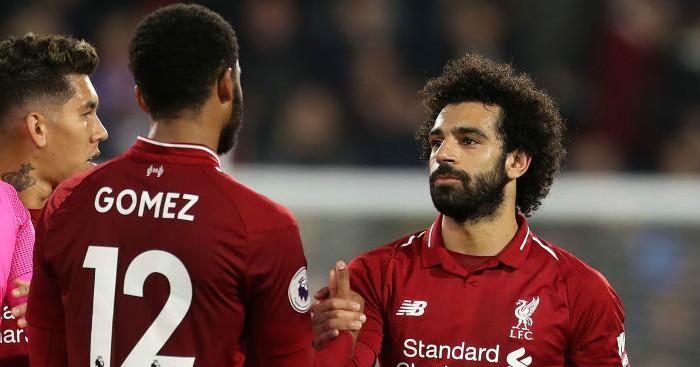 Trent Alexander-Arnold and Andrew Robertson were Liverpool’s breakout stars last season, and the transformative effect Virgil Van Dijk and Alisson have had on the back line since joining in January and July respectively speaks for itself: what had been the most laughably error-prone defence in the top four last season is now the Premier League’s best.

Joe Gomez was not immune to making those errors: mistakes against Arsenal last December and Manchester City a month later led directly to opposition goals. Such things are to be expected of a youngster – he turned just 21 in May – but the glare of the spotlight can be incredibly harsh for players at big clubs, regardless of their age, and patience wears especially thin when you’re playing in a side already known for a proclivity for blunders. As we wrote when placing Gomez 40th on our famous World Cup ladder this time last year: “[He’s] playing for Liverpool, but the defensive record hardly screams ‘Pick me!’.”

After missing out on any chance of making England’s World Cup squad through injury, however, Gomez has relatively quietly emerged as one of the most reliable and composed defenders in the Premier League.

That’s not to say Gomez has not received praise – Gary Neville has come out as something of a fan, for instance, while the always-fun Garth Crooks got a bit carried away by comparing him to Bobby Moore. But that he is now so firmly undroppable for Liverpool and, by our estimation, now Southgate’s fourth name on the England squad list is a remarkable achievement for the youngster. He has gone from “hardly screams ‘Pick me!'” last year, to a performance against Spain last week – Spain! – that led us to write: “His pace, strength, positional play and ability on the ball makes him a nightmare for strikers, as he has no real deficiencies to exploit.”

Add versatility and composure to the list. More experienced players may have panicked at the prospect of being switched from centre-back to right-back specifically for the visit of Manchester City, for a variety of reasons, ranging from ‘do you not trust me as a centre-back?’ to ‘but I’ve not played here all season’ to ‘f***, it’s Manchester City’.

But Gomez does not strike you as a player who responds poorly to challenges. This is a player, remember, who missed exactly one year of football with an anterior cruciate ligament injury just months into his Liverpool career in 2015, when he was just 18 – an injury that footballers often cite as the one injury you never want to suffer. To come back from that at such a young age requires incredible fortitude.

Gomez was retained at right-back for the trip to Huddersfield Town even though it’s not even Alexander-Arnold’s birthday this week, and again showed his composure with a defence-splitting pass that allowed Xherdan Shaqiri to play in Mohamed Salah for the only goal of the game. Throughout the game, he cantered calmly up and down the right flank, often looking the most likely creative outlet in a side that is supposedly full of them. Only Dejan Lovren’s continuing frolics and flailings will keep Klopp from automatically putting Gomez down for a third successive spin at full-back when he next picks his first-choice eleven.

This effusive praise should not be read as a declaration that Gomez is perfect. He will doubtless make the odd mistake this season; to expect otherwise of a young defender would be folly. Nor is he likely to set the heart racing with exciting, sumptuous football. But both Liverpool and England fans will feel a lot more comfortable about the future with Gomez around.