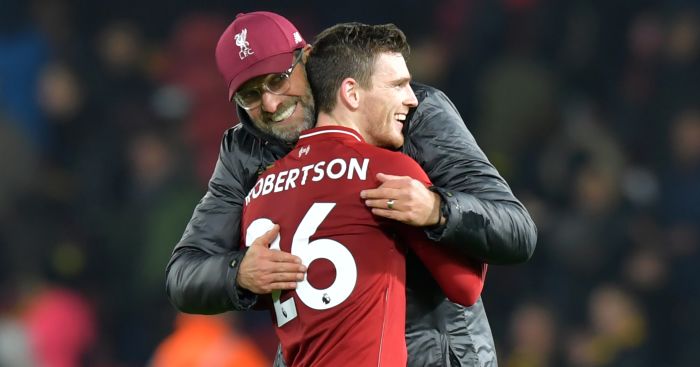 Scotland captain Andy Robertson has not given up hope of facing Kazakhstan on Thursday despite missing the team flight to undergo dental surgery.

The left-back travelled to Glasgow after Liverpool’s Premier League win at Fulham on Sunday but was told to stay behind to get an abscess treated as his international team-mates flew out overnight ahead of their opening European Championship qualifier.

Robertson was given a chance of making the second Euro 2020 qualifier in San Marino on Sunday but assistant coach Peter Grant revealed the 25-year-old was being even more ambitious.

On Robertson’s absence from the team hotel in Astana, Grant said: “It’s a big blow. We were prepared for it obviously, before the game on Sunday we knew he was struggling a little bit but he wanted to play.

“And the way he is, he is still desperate to play and still trying to get himself back out here as well. That’s the way Andy Robertson is, that’s why the manager selected him to be his captain, because he is determined to play for his country.”

Grant admitted Robertson would have flown if it had been left to the player.

“He had no choice because he couldn’t fly with it,” the former Celtic midfielder said. “The swelling and the pressure in the air was going to be a problem for him. He went straight from the plane to the hospital and he was hoping he was still going to fly, that’s why we held the plane up a bit. Obviously they wanted him to get an operation done.

“I would hope he would join up for here. He’s going to see about his tooth problem today (Monday) and we will take it from there.

“Toothache is one of the worst problems you can have but he is so determined to be part of it. He wanted to come out Sunday night. He showed that flying up straight after the game, how desperate he was to be here. But when he got checked out it wasn’t possible for him to do that.

“If it was anybody but Andy Robertson you would say there’s no chance. But knowing the way Andy is, if he thinks he’s got a chance there is always a possibility. We won’t rule him out.”