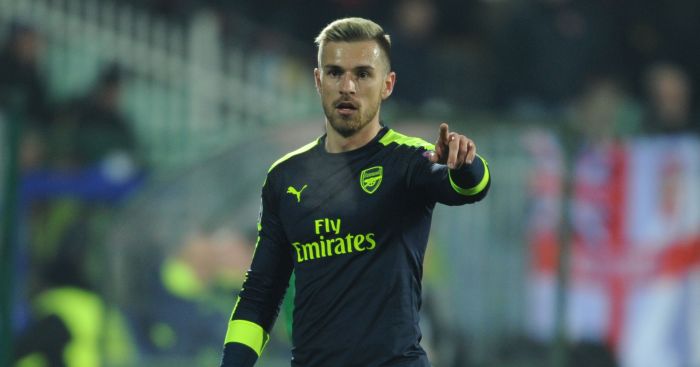 Aaron Ramsey completed his return from injury as Arsenal beat Ludogorets to advance into the last 16 of the Champions League – and now the Wales international has Tottenham in his sights.

After a summer to remember where he was part of the Wales squad which reached the semi-finals of Euro 2016, Ramsey’s start to the season was curtailed by a hamstring injury in the defeat to Liverpool on the opening weekend.

The Gunners have not lost in any competition since then and a 3-2 win over the Bulgarian champions in Sofia means they have qualified for the last 16 for the 17th consecutive season.

They made hard work of their task, falling two goals behind in the opening 15 minutes as Jonathan Cafu and Claudiu Keseru capitalised on poor defending, before goals from Granit Xhaka and Olivier Giroud hauled Arsenal level.

The winner from Mesut Ozil with just three minutes remaining will live long in the memory as he latched onto Mohamed Elneny’s through ball before lofting over the onrushing goalkeeper and calmly slotting home, leaving two Ludogorets defenders lying prone on the turf.

Ramsey was not on the pitch at the time having been replaced by Alex Oxlade-Chamberlain on 75 minutes. But after a cameo in the win at Sunderland at the weekend also under his belt, the 25-year-old is raring to go for Sunday’s Premier League clash with north London derby rivals Tottenham.

“Of course I’m ready,” Ramsey said when asked if he was targeting a start against Spurs.

“I wouldn’t be out there starting last night if I wasn’t ready. It was great for me.

“Obviously I have been out for a couple of months now and it was nice to be out there starting again and to get in 70-odd minutes, that has put me in good shape going into the weekend and hopefully I can stay fit.”

Ramsey was also recalled by Wales on Wednesday, having impressed Chris Coleman with his club performance in Europe.

Arsenal are joint leaders in the Premier League having not lost since that 4-3 reverse to Liverpool, while Tottenham are right on their heels having yet to taste defeat in the competition this campaign.

“They have been a tough challenge in the past couple of seasons,” Ramsey said of Mauricio Pochettino’s side.

“It is a derby game so we know what we are up against and what to expect. They are unbeaten in the league so far this season and it is going to be up to us to try and break them down.

“We are at home and I’m sure going into that game we will be full of confidence, we can get a win.”

No Dele Alli to be seen in this list… https://t.co/SNR6QnXxYy

That confidence could have taken a hit in Bulgaria, but coming from behind in the manner they did saw Arsene Wenger’s side continue on their current run of good form.

Ramsey hopes it continues into this weekend and beyond.

“It was a difficult game and going 2-0 down wasn’t the start we wanted, but fair play to them, they had two decent counter-attacks but we showed great character in the end to come back,” he said.

“We just got caught on two counter-attacks, which was sloppy, but they have quality as well. Those things happen and it is how you respond to them.”

Asked about achieving qualification after four group games, Ramsey added: “It is something that we wanted to do, we have managed to achieve that and now we want to try and top the group to be on the favourable side of the group.

“The next game (at home to Paris St Germain, who have also qualified) will be the big one.”

While Ramsey is fit and ready to play, his place in the side for the derby is up for debate as Wenger will be hoping the likes of Theo Walcott and Santi Cazorla will be fit enough to be involved, while Alex Iwobi is also likely to return to the starting line-up.