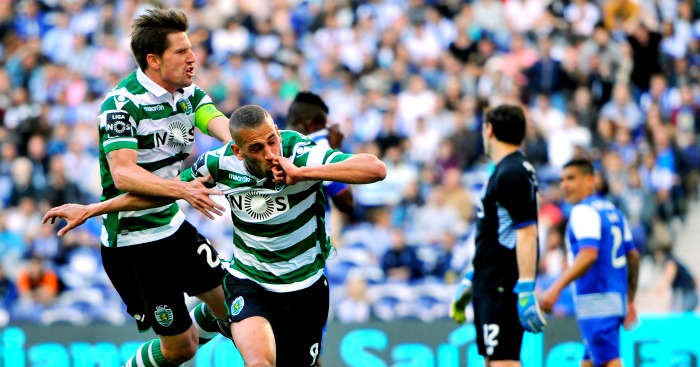 Leicester are working on a deal to sign both Islam Slimani and Adrien Silva from Sporting Lisbon in a double deal worth close to £50million.

The Premier League champions have signed six players so far this summer, including a club-record deal to sign striker Ahmed Musa.

That £16.6m fee is expected to be smashed as the Foxes negotiate the transfer of £29m-rated Slimani from Sporting.

Portugal midfielder Silva is also expected to move to the King Power Stadium in a deal reported to be worth £21million.

Silva, 27, part of the Portugal squad which won Euro 2016, told Porto-based newspaper O Jogo: “Yes, I confirm this proposal. Leicester is very interesting and corresponds to my career goals.

“The bid was of €25m and it was never a condition that the departure was for the amount of the clause,” he added.

However, confusion reigned over the deal last night after Sporting posted the following statement on their official website:

‘In light of news articles published throughout the day in relation to the player Adrien Silva, Sporting SAD notes the following:

1 – The player renewed his contract in February 2016 in a deal involving significant sums of money, making it absolutely clear that the extension to his contract would mean that Adrien Silva would say at the Club until the end of his career. This was expressly stated by the president of Sporting CP, the player’s father and representatives before agreeing the contract.

2 – Additionally, Adrien Silva gave an interview on the 23rd of May in which he clearly said that he would not leave Sporting without winning the league.

4 – Adrien Silva is a contracted professional player who knows how to respect the club as a person and an athlete. All Sporting fans see him as an example to follow.

5 – Sporting CP and its president will always defend the interests of the club and will also defend the club’s assets.

6 – It is understandable at this stage that agents or representatives of athletes are a destabilising influence on players. This however will not affect how the club or its fans treats players.’

In response, Silva’s agent, Jonathan Mareek, spoke of the player’s disappointment at the club’s conduct.

“Adrien is sad with what’s happening,” he told Record. “A bid from a club which interests him greatly has arrived. He is sad because it’s not what was planned and agreed.

“Sporting don’t want to let him leave. By the way, they don’t even want to negotiate him. This is the biggest problem.

“There’s a bigger offer, by the way, which Sporting, initially, told me they were waiting to receive. They put Adrien on the market and always showed themselves receptive to negotiate.”