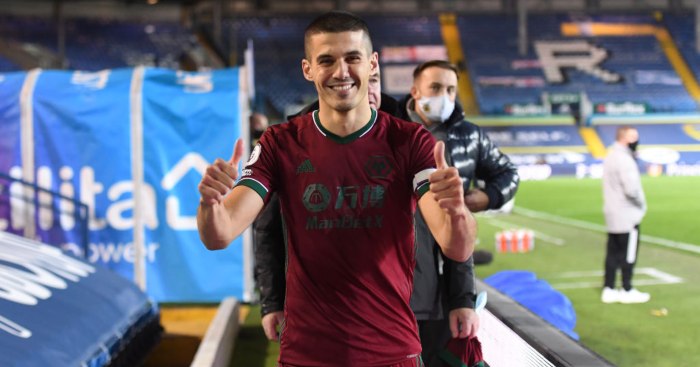 Conor Coady has laughed off Jamie Carragher’s claim that Jurgen Klopp wants him to sign for Liverpool in January to replace Virgil van Dijk.

Van Dijk will be missing for several months following Jordan Pickford’s controversial tackle on the Dutchman in the Reds’ Merseyside derby draw on Saturday.

And Carragher couldn’t help but tease boyhood Liverpool fan Coady over possible links with a return to Anfield.

Speaking on Sky Sports’ Monday Night Football, Carragher said: “You won’t be aware but Jurgen Klopp tonight has done his Champions League press conference ahead of the game with Ajax.

“He’s actually mentioned you and two other players who he thinks could actually be replacements for Virgil van Dijk, would that come into your thinking?”

In response Coady said: “I can’t believe you’ve just put this on me here, no!

“I can’t believe it. Not at all, I love playing for this football club every single day.

Carragher added: “You must be honoured though, with Klopp saying that?”

Host Dave Jones interrupted and said: “Conor, don’t believe a word he is saying. Don’t get dragged into that honestly!”