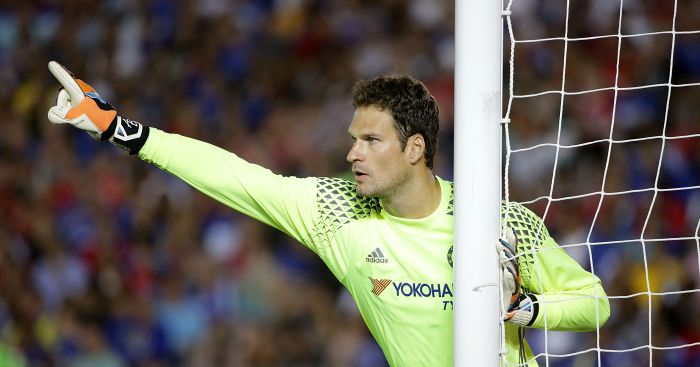 Asmir Begovic will only be allowed to leave Chelsea if Antonio Conte can find a suitable replacement.

The Blues are considering an offer from Bournemouth for the 29-year-old former Stoke goalkeeper, who is back-up to first choice Thibaut Courtois.

Chelsea head coach Conte says Begovic will start Saturday’s FA Cup fourth-round tie at home to Brentford, but declined to say whether Celtic’s Craig Gordon was under consideration as a replacement.

“Begovic is a Chelsea player. It’s important to understand this.

“Begovic is Chelsea’s player and I’m very happy to have him to stay in the squad.

“I’m very happy for his commitment, his behaviours in and out of the pitch.

Conte stresses Begovic is a Chelsea player and the Italian says the goalkeeper will start tomorrow. #CFC

“Only if we have a good substitution he can go. Otherwise (Begovic will) stay here.

“We are open to help him if there is the opportunity to replace him in the best way. If it’s not possible, Begovic stays with us.”

Begovic signed a four-year contract when joining Chelsea in the summer of 2015, replacing Petr Cech after he left for Arsenal.

The Bosnia-Herzegovina goalkeeper has made four Chelsea appearances this season.

Conte was again coy on the prospect of players leaving or moving to Stamford Bridge in the final days of the transfer window, which closes on Tuesday evening.

“I don’t know what will happen at the end of this window,” Conte added.

“The club knows my thoughts about this. If something happens, also to improve our squad…

“If we stay with these players I’m very happy too.”

Conte’s Chelsea remain the heavy favourites with Bet365 for the League Title this season.