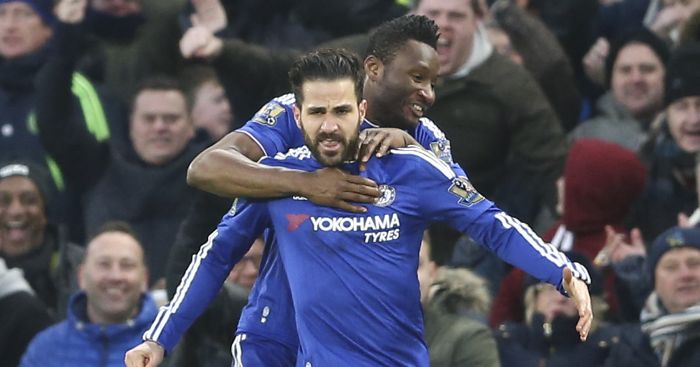 Chelsea boss Antonio Conte has ruled out Cesc Fabregas leaving the club but he was a little less clear on the future of John Obi Mikel.

Fabregas has only started two Premier League matches this season for the Blues and has appeared in five matches in total out of a possible 14.

The Spaniard performed brilliantly against Manchester City in a rare start last weekend and could be in contention for a place in Conte’s starting line-up for the West Brom match.

However, he has constantly been linked with a move elsewhere in the January window and Conte was again posed the question at his pre-match press conference on Friday.

“I’ve already replied to this,” Conte said. “He’s a good player and I want him to stay here. I don’t see nothing in that.”

When asked whether Fabregas’ recent performances have made his selection for this weekend’s match against West Brom more difficult, Conte replied: “I have to have this kind of decision for every game. I think he was good. he took his opportunity and I have a choice of four midfielders. Matic, Kante, Chalobah or Fabregas.”

Another player that has been linked with a fresh start in January is Mikel and Conte was a little more laid back about the future of the Nigerian.

“The situation is simple,” Conte added. “He’s in the squad and he stays with us and at the end of this season his contract will probably expire. But I don’t know what will happen. For now he’s part of the squad and every single game I take my decision about him.”

With the Master ⚽️ pic.twitter.com/pUjvXdg0TO