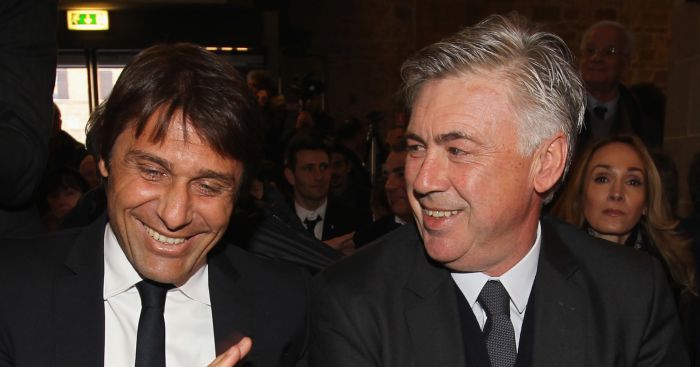 Antonio Conte does not expect to see Carlo Ancelotti back in the Premier League this season after spending “a lot of energy” on Bayern Munich.

The Italian left his position at the Allianz Arena on Thursday after their 3-0 defeat in the Champions League to Paris Saint-Germain the night before.

Bayern Munich president Uli Hoeness claimed that as many as five players in the dressing room had turned on Ancelotti and Conte gave his reaction ahead of Chelsea’s clash with Manchester City at the weekend.

“It is a pity when it happens this type of situation, also because I know him well,” Conte said in his pre-match press conference.

“He is one of the best head coaches in the world. As you know our job is this, the result are very important and you can do a really good job and if there isn’t the result you risk this.

“We try to repeat that it is important to value our job. The result is part of our job. We can speak, but it depends on the job. You can be best and if you lose you risk it.”

When asked if he thought Ancelotti would be seen in again in the Premier League, Conte added: “I don’t know. I think now he will be stopped this season, in my opinion. When you are the coach of a great team and spend a lot of energy mentality and you have the opportunity sometimes it is not bad.”