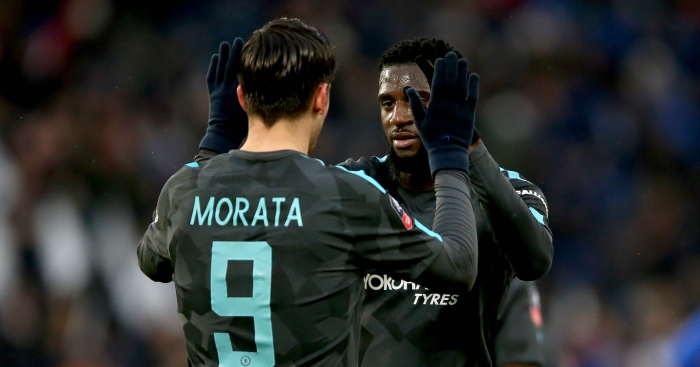 Striker Morata ended a 13-game run without a goal with his first since Boxing Day in a 2-1 win secured by Pedro’s extra-time header. The Blues will face Southampton in next month’s semi-final.

Conte’s satisfaction was because Chelsea lost 3-0 at Barcelona on Wednesday to exit the Champions League, meaning the FA Cup is their last remaining chance of silverware this season.

And his side responded from conceding to Jamie Vardy 14 minutes from the end of normal time to advance.

“We must be pleased for the character we showed in this game against a really good team,” Conte said.

“After a game in Champions League it wasn’t easy for us to play 120 minutes in this way.

“Tonight we fought a lot against Leicester. We showed great desire, great will.

“For Alvaro it was very important to score. I’m very pleased with his performance.

“He played a very good game, he showed great character, he showed to be stronger. I think this goal will be very important for the future for us.”

Like Morata, Tiemoue Bakayoko started. Bakayoko’s performance was poor, but Conte insisted he was substituted for Cesc Fabregas at half-time only because he had been booked.

“Baka got a yellow card, and we are talking about a player with great physicality,” Conte added. “And, in a game like this, you have to prevent a second yellow card. For this reason, I decided to change him.”

Willian and Andreas Christensen were replaced in extra-time due to fatigue after their midweek exertions and Pedro made the most of his opportunity, converting N’Golo Kante’s cross.

Conte added: “It’s great for him, great for the team. Pedro is another player who puts in every moment everything for the team, if he starts the game or if he comes in during the game. I’m very happy for him.”