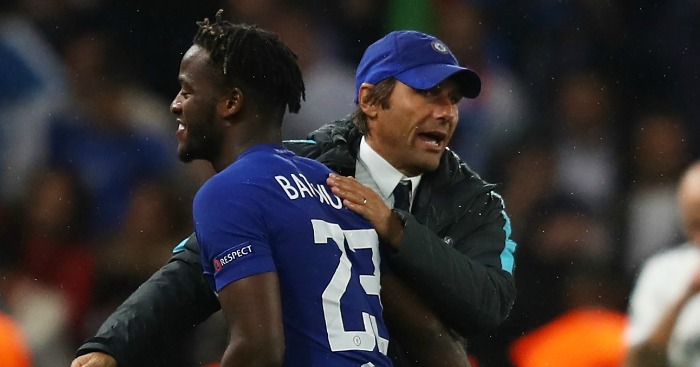 Antonio Conte was quizzed over the transfer merry-go-round which involves Chelsea, Arsenal, Borussia Dortmund, Tottenham and about 427 strikers.

Chelsea have prioritised the signing of a back-up striker this month, with Peter Crouch, Ashley Barnes and Edin Dzeko all linked.

Conte confirmed on Tuesday that Dzeko would likely remain a Roma player this month, but the Italian also answered questions about a host of other players.

Olivier Giroud is the latest player to be linked, in a move that would see Arsenal sign Pierre-Emerick Aubameyang, and Dortmund bring in Batshuayi to replace him.

Fernando Llorente of Tottenham was also included in negotiations at one point, but that move will not go ahead.

“I give my opinion to the club and then they try to do their best in the transfer market,” Conte said on Giroud.

“I can speak about specific characteristics of players and how we can improve.

“But we are talking about players of other teams and must continue to have respect.”

Asked about Batshuayi, he said: “In this situation, the coach has to speak with the player.

“It is not simple to find a solution for players to come in. There is only one day and it isn’t the best for me or the player.

“The players know the situation very well and he trained well today. I am preparing for the game with him but you don’t know what will happen today or tomorrow.”

On Llorente, he added: “The summer was the summer. January is winter and it is a different situation.”