Home Chelsea Conte vs Mourinho: The scoreline is 7-3 so far…

Their first meeting was not in England. Antonio Conte has a decent lead over his adversary thus far. 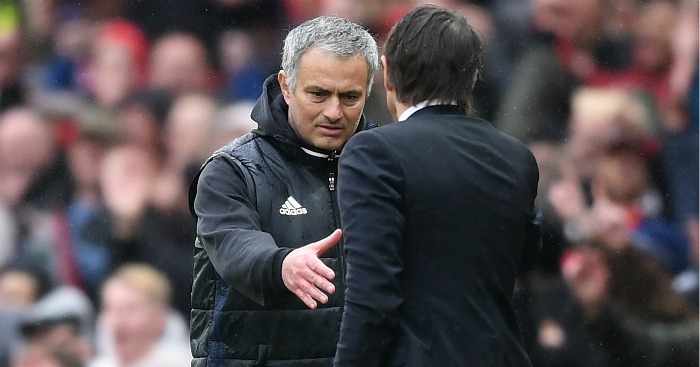 The scene
2009/10 was Inter’s miracle season. They won their fifth Serie A title in a row – no shock there – but also lifted the Coppa Italia and Champions League to become the first Italian team to win the treble. For their part, Atalanta were relegated, with Conte resigning in January. This match came just two games before his eventual departure, and was unusual in that both managers were serving touchline bans.

The game
Inter took the lead on 15 minutes when Diego Milito (who would become their Champions League final hero) collected a pass from Wesley Sneijder before stumbling past two defenders and clipping the ball in at the near post. Sneijder struck the crossbar with a free-kick, but was sent off for a second yellow card before substitute Simone Tiribocchi slotted the ball past Julio Cesar.

The quotes
Jose Mourinho (who was accused of a verbal and physical attack on a journalist after the game): ”I don’t like to have journalists near the team bus after a game. I have said it many times before to those who are in charge of communication and safety at the club. Not knowing that this journalist had been authorised by one of my colleagues and seeing him in an area where only the Inter Channel is allowed to work, I came out of the bus and I insulted him twice. But I did not try to hit him, there was no physical contact.”

The scene
Mourinho was back at Stamford Bridge for the first time since being sacked by Chelsea. Conte had lost two and drawn one of his first eight league games in England, with little sign of the majestic run that was to come. United, the preseason second favourites for the title, had won only half of their league games. Arsenal, it now sounds ludicrous to say, were top of the Premier League heading into that Sunday.

The game
Chelsea scored after just 30 seconds after Pedro capitalised on some wretched defending, and the game was as good as over when Gary Cahill scored from a corner. Eden Hazard added a third after half-time, and N’Golo Kante rather took the p*ss on 70 minutes when sauntering through United’s defence to make it 4-0. Conte rather enjoyed the whole process.

The quotes
Jose Mourinho: “You don’t celebrate like that at 4-0. You can do it at 1-0, otherwise it’s humiliating for us.”

Antonio Conte: “It’s right to celebrate when you win. When you work very hard and win, it’s important to celebrate. But I prefer to win a war, not a battle. I have already told my players that United is in the past.”

The scene
Not content with sauntering to the Premier League title, Conte had Chelsea focused on FA Cup success too. They had scored four against Peterborough and Brentford before winning 2-0 at Championship Wolves. In the quarter-finals, the pick of the ties was at Stamford Bridge. With the league title and top four place both looking lost, Mourinho had United concentrating on cup competitions.

The game
Chelsea progressed thanks to a second goal of the season scored by Kante against the same opponents, his low drive enough to beat David de Gea. United’s goalkeeper kept his team in the match in the first half, but the visitors were undone by Ander Herrera’s second yellow card and had just 28% possession in the game. On the touchline, Conte and Mourinho clashed on several occasions and did not shake hands at full-time. Mourinho was taunted by Chelsea supporters throughout, and raised three fingers to indicate the number of titles he had won at Stamford Bridge.

The scene
Chelsea had been strolling towards the league title, but were in the process of stumbling close to the finishing line. A 2-1 home defeat to Crystal Palace had been followed up wins over Manchester and Bournemouth, but Tottenham’s magnificent run of form had cut the gap at the top and at least given us a title race. United were on their ludicrous unbeaten run while still remaining in fifth or sixth position. The prioritisation of the Europa League was just around the corner.

The game
See, they can do it. Manchester United saw glimpses of life after Zlatan Ibrahimovic, at it was good. Marcus Rashford played with Jesse Lingard as a hybrid front two and United dominated Chelsea, who had Marcos Alonso and Thibaut Courtois out through injury. Herrera shut down Hazard, and in doing so shut down Chelsea. Rashford scored early and gave United the impetus, and Herrera’s second-half deflected goal made the points safe. Chelsea’s lead was cut to four with six games remaining.

The quotes
Jose Mourinho: “They are the best counter-attacking team in the country and we controlled them very well. I’m really happy with the boys. I’m happy – it’s not because it’s Chelsea, it’s because we need these three points. I don’t feel extra joy at beating Chelsea – we beat the leader. It doesn’t matter if the leader is Chelsea or another – we beat them convincingly. Nobody can doubt our credit to win the game.”

Antonio Conte: “I think this season it’s very important to understand that it’s not always who spends more money who wins. Otherwise, in this league this season, the name of the team (who would win the title) wasn’t Chelsea or Tottenham or Arsenal or Liverpool. You understand?”

The scene
Mourinho’s United were again the preseason second favourites behind Manchester City, and started off in rollicking form by taking 19 points from a possible 21 available. Then came the hiccup, the tedious 0-0 draw at Anfield followed by defeat at Huddersfield. Their next away game was at Chelsea, for whom everything was no longer rosy. Conte was unimpressed by his club’s transfer market ambition, and the defending champions had lost three of their first ten league games. The pressure was on both managers.

The game
Alvaro Morata scored his first goal for six weeks, a header from a Cesar Azpilicueta cross, natch. It was another dismal away performance from United, who showed little ambition to attack before Chelsea’s goal and were unable to mount enough pressure after it. United fell eight points behind City at the top, and this was Mourinho’s third straight Stamford Bridge defeat since being appointed by United.

The quotes
Antonio Conte: “We can win or lose but our spirit must be this. Last season our spirit was in every game – we started this season with a lot of problems. We were up and down. This game showed if we want, we can.”

Jose Mourinho: “The first half was really even. In the second half in the only period where they were on top of the game, they scored. It frustrates us to concede a goal in this situation. We lost ourselves after the goal emotionally. We found again the balance and desire in the last 15 to 20 minutes. It was all us.